Michael Rennie and the ‘SS City of Benares’ 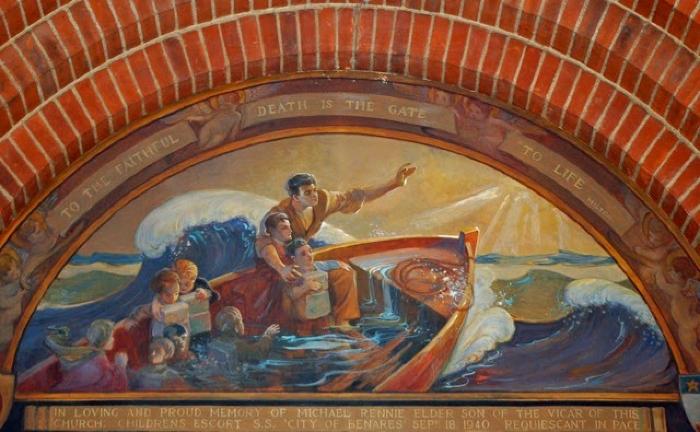 Michael Rennie was the son of the Reverend William Maxwell Rennie, the third Vicar of St Jude’s. He had just graduated from Keble College, Oxford and was waiting to go to Westcott House theological college in Cambridge to train for the priesthood when he volunteered to travel as an escort with a group of children being evacuated to Canada on board the SS City of Benares in September 1940. On the night of 17/18 September, when she was about 600 miles west of Ireland, the Benares was torpedoed by a German submarine and sunk in the early hours.
Michael was able to get his boys on board their lifeboat, but it tilted when being lowered and all were thrown into the sea. He was rescued by another boat but when he saw children in the water Michael immediately dived in again and again to rescue them. His companions on the boat warned him to slow down as the children had lifejackets and would be picked up but Michael, seeing their terror and realising they were in danger of being buffeted or swept away, insisted that so long as there were any in the water he had to go for them. With the seas getting rougher and the waves higher Michael assured the boys in the boat that rescue would not be far away, although it was not until the evening that it came into sight. Michael stood up to wave to the distant warship but due to his repeated efforts he was exhausted and fell dead into the waterlogged boat.
Despite all his efforts only two of the fifteen boys survived to be picked up by the destroyer HMS Hurricane and one later died. Of the 406 passengers and crew of the SS City of Benares, 258 were lost including 77 of the 90 children. The incident caused great public outrage in the United Kingdom and led to the ending the wartime transportation of children to Canada.The incident was also widely used in propaganda against the Germans and it was later learned that many of the crew of U-48 had been shocked and conscience-stricken at their action.
Louis Walder, the final sole survivor of the children in Michael’s lifeboat, wrote to the Vicar about his son’s last hours and was present at the dedication of the memorial by the Archbishop of Canterbury on 18 October 1942 at which Michael’s brother Peter sounded the Last Post.The seamen from the City of Benares lost at sea are commemorated on the Merchant Seamen’s Memorial at Tower Hill, designed originally by Sir Edwin Lutyens.

Rev William Maxwell Rennie
Third Vicar of St Jude's church, he served for nearly 20 years from 1936-1954 when he sadly died in office.

St Jude's - Murals
This is a collection of the Murals and Frescos created by Walter Starmer over a number of years within St Jude's, starting with the Lady Chapel in 1921.