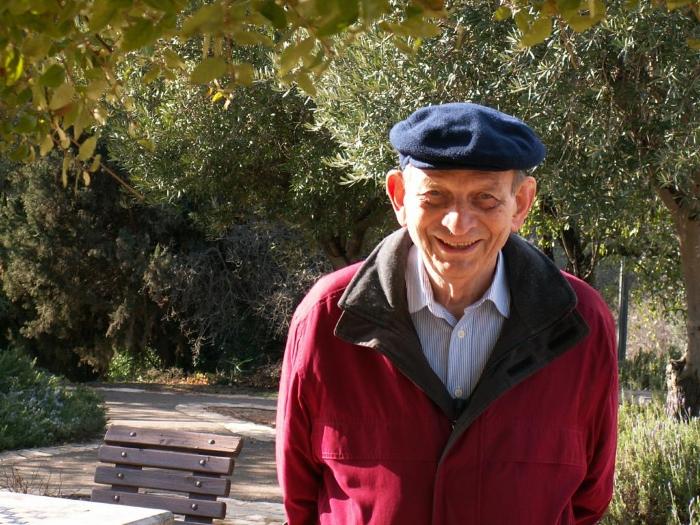 Professor Sam Eilon lived more than half his (happily) long life in Meadway Close, and loved walking each day around the streets of Turner Close and Turner Drive. He was particularly proud of his large family house, having started life in a 2 room (not 2 bedroom) flat which was partially rented to lodgers to supplement the family’s income. He was born in Mandate Palestine in October 1923 and was a second generation Jewish Palestinian born in Jaffa, as a result of his great great grandmother kidnapping her baby granddaughter (Sam’s future grandmother) in Odessa (beset with pogroms at the time) in the 1880s and taking her to Ottoman Palestine to force the rest of the family to follow.

Sam was a lifelong committed Zionist who, was brought up speaking Hebrew, was educated at the Reali School and the Technion in Haifa.   Whilst still studying he did a little bit of maths tutoring on the side, which stood him in good stead: one of his teenage students was Hannah who was doubtless charmed by his quick wit and good looks. (Frank Sinatra was considered to be Sam’s lookalike, at least by Hannah and her friends.)  It was a love match that lasted his whole life.  They were married for more than 73 years.

Sam was a member of the Haganah, and fought in Israel’s War of Independence. Sam believed to his very core in the importance and rights of State of Israel. In 1948 (the year his eldest son Amir was born) Sam was in charge of IDF supplies and logistics in the Sfat area; this set of challenges started him on the road from mechanical engineering to the application of scientific method and mathematical tools to management, decision-making and the control of complex systems and procedures.  He spent some 6 years in the IDF, achieving the rank of Major, among the earliest of a long string of titles and degrees which are listed in his Who’s Who entry.

Sam and Hannah came to the UK initially to study. For a young Israeli couple with two children Amir and Ronit (the youngest two, Carmel and Daniel, were not yet born) immigrating to set up a new life in London in the 1950s was not easy.  But Sam was a pioneer and a clear-sighted, innovative thinker who challenged assumptions and disrupted many accepted norms.  Things were not always easy for him - he did not have any connections and in some circles he was not accepted as “one of us”.  But through hard work and an impressive intellect Sam created the new academic discipline of Management Science and became the head of his department at Imperial College, a post he held for some 30 years. He recruited an excellent team around him and created a family atmosphere among the staff.  Their approach used advanced mathematical skills to analyze complex datasets and applied rigorous scientific method to the comparison of alternative strategies. Sam was a formidable mathematician; his published work and the courses taught generations of students and readers that many things in the management arena may not as they initially appear to be, and that by digging deep into the complex relationships between various causes and performance criteria it is possible to transform decision making from an art to a science, from luck to method. Over the course of his academic career he wrote 16 books including the famous Production, Planning & Control (which continues to be regularly reprinted in India) and Aspects of Management plus over 300 scientific papers. The department Sam founded became an internationally-respected in the field of management, and in due course became what is now the business school at Imperial College.  In 2019 Imperial College awarded Sam a medal in recognition of his contribution to this success.

Sam was highly appreciated in universities around the world, lecturing widely and acting as an external examiner.  Long before it was common practice, he went on a tour of China where he lectured in huge amphitheaters to hundreds of students.  He particularly enjoyed a moment when the translator apparently told the audience in Chinese, “Please laugh: the Professor has just made a joke”.  Alongside academic work Sam was a consultant to a wide range of industries; ranging from NatWest Bank to Westland Helicopters.  He believed that industrial and commercial experience was an essential part of the toolkit of anyone teaching management.

After he retired from academia he served for many years as a member of the Monopolies Commission where his mathematical acumen, his ability to absorb complex arguments and analyse supporting data and spot the inconsistency on page 286 of Appendix C, all stood him in very good stead.

For his family the most important attributes of Sam were that he was a wonderful supportive and loving father of four, father-in-law, grandfather of ten and great-grandfather of seven. He was always involved in his children’s and his grandchildren’s lives, sharing and motivating them to do well. Sam adored Hannah and luckily the feeling was mutual.  Sam and Hannah were a close and loving team who shared the same values. They were apart from one another for barely a handful of days over the course of eight decades.  He was kindly, mischievous, teasing, benign, brilliantly analytical but also delightfully silly and playful; a sweet and lovely man who was an example to us all how to live a full and rich and productive life.