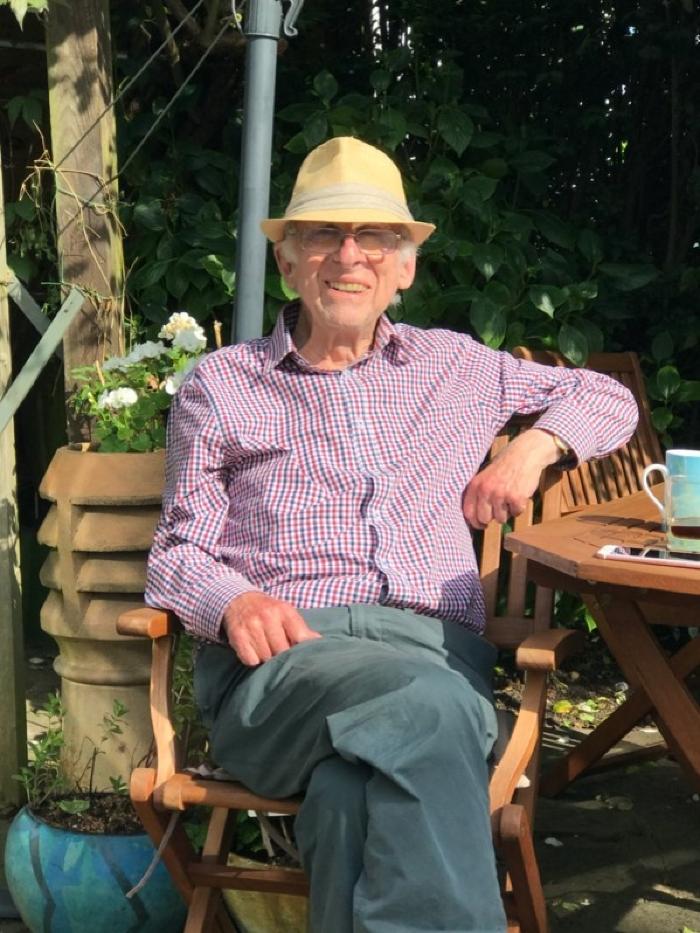 Pete was born in Liverpool in 1935, his parents’ first child with his sister Margaret following two years later.  His earliest memory was seeing the second RMS Mauretania being built in 1938 and then watching her maiden voyage past Ainsdale beach.  Pete’s dad was a dentist and during the war the family was posted to various places, including Buxton and Caernarvon, ending up in the Isle of Man in 1941, living with his dad’s family when his dad was posted to Egypt.  At the end of the 1940s the family moved to Barry in South Wales, leaving Pete boarding at King William’s College in the Isle of Man.

Pete had a great time at school and loved to regale us with stories about his time there, one of which featured in the local press declaring him a hero due to his discovery of a fire which had been started by the PE master having a sneaky cigarette!  His passion for airplanes started at school due to his bedroom overlooking the runway of Ronaldsway airport; he whiled away many hours there plane-spotting with his friends.

Pete prospered at school and then in 1954 he started his National Service which he spent at various places including Oswestry, Salisbury and the Brecon Beacons.  He didn’t much enjoy his time in the army but, typical of Pete, he always looked on the positive side and remembered the funny moments.

In 1956 he gained a place at Jesus College, Oxford to read maths, where he had a fantastic time and made lifelong friends.

Pete’s first job was at an IT company in what were the early days of computing.  During his first few weeks of training he found himself in the back row of the class with Andrew, the brother of his future wife, Jan, which led to their fateful meeting at the bar in Queens’ Ice-skating Rink in Bayswater.

Jan and Pete married in 1962 and bought their first house in Asmuns Hill.  Over the next few years Roz, Ziz and Patrick arrived and in 1969 the family moved to Hampstead Way where they stayed for over 50 years.

Pete continued working in IT and in the early 1970s he moved to International Aeradio Limited where he was able to combine his work with his ongoing passion for aviation.

On the local front, Pete was very involved with the local branch of the Liberal Democrats.  He also helped run the bar at the annual Proms at St Jude’s and spent many hours helping Jan raise money for the North London Hospice by running bookswaps and helping to organise the annual Big Fun Walk.  Pete was also Honorary Treasurer for 13 years at The Orchard Housing Society in the Suburb.

Pete’s priorities were always his family and his dogs.  He loved nothing better than to spend his time chatting and laughing with his children and grandchildren and his favourite times were the many holidays the whole family took together.  He was devoted to his wife Jan and cared for her so lovingly when she became ill.   Pete had a great sense of humour and was very sociable – his daily walks around the suburb could take hours as he stopped and chatted with all his acquaintances!  Pete was always positive, fun, kind, considerate and gentle and his passing leaves a very large gap.  Needless to say, he is hugely missed by us all.