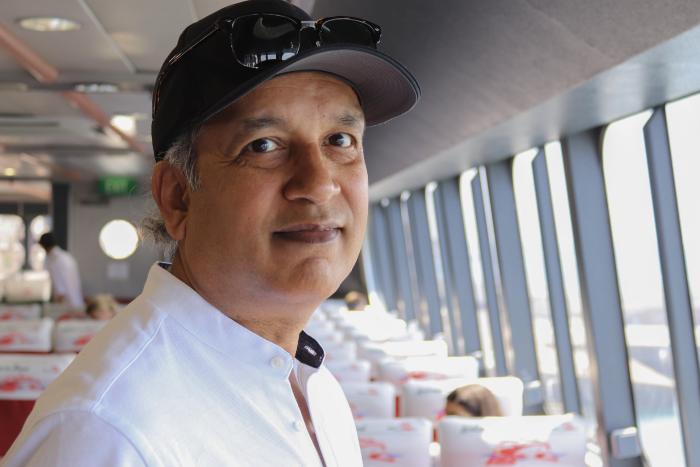 How do you begin to describe a giant of a man who had so many wonderful qualities? His empathy and compassion for others, generosity, his huge heart and warmth, the utter devotion to our two children, family loyalty, and eternal love as a husband. His ‘can do’ attitude, the popular host of frequent dinner parties in house and garden, expert cook, the first and last on the dance floor, charming smile, the unending care for neighbours who needed help.

Multi-talented actor, theatre director, screen writer and film producer, winner of dozens of international film festival awards. Elegant, beautifully dressed, handsome, a true gentleman who always opened the car door for me and held my hand. An eye for detail in home building, décor and creating a beautiful garden. The witty raconteur with stories about his rich life experiences from across the world. But above all, the unconditional good deeds for others.

Arif made people feel special, which is why so many have told me that Arif was their best friend. He was my best friend, and my husband for 24 years, by my side for 29 years.

Arif’s achievements could fill a book, but what follows is a brief snapshot of his life and successes.

Arif was born in Singapore to parents who originally came from Lahore. Arif’s father moved to UK in 1960 from Singapore in search of a new life for his family, planning for the rest of the family to follow once he had set up a home for them. Meanwhile the family moved back to Lahore. Unfortunately, political events took over and young Arif, his mother and his siblings were caught up in border fighting between India and Pakistan. Unable to return to their house the family were placed in a refugee camp in Shalamar Gardens Lahore for six months in 1965.

Contact with Arif’s father was lost as valuable letters with Arif’s father’s address were left in the inaccessible family home. Arif’s mother was multilingual but illiterate, so she took Arif and his sisters to a letter writer and asked the children if any of them could recall their father’s UK address. Arif thought hard and remembered fragments “Villington Road, Bilstoon” which was how it was pronounced but not actually written. Amazingly, six months later the letter reached Arif’s father in Wellington Road, Bilston, near Wolverhampton. The father had lost all hope that his wife and children were still alive. He sent them money and the family were reunited in April 1969 UK when Arif was 11 years old.

These early experiences of being displaced, fatherless, homeless never left Arif, and become a crucial part of his work in later life.

The expectation at his Wolverhampton school was that pupils would become locksmiths at 16 years. That didn’t suit Arif, he had very big ambitions, he was keen to keep learning, to explore and develop. He attended college, gained academic qualifications and spent two years travelling the world. A chance visit to the theatre inspired Arif to become an actor, something that was completely outside of his Asian family experience, but he was determined.

Arif attended Mountview Theatre School in Crouch End 1980 – 1983 gaining BA Performing Arts , painfully shy at first, but he built up his confidence. In 1984 he founded the Alma Mater Theatre Company; registered with UK Equity Alma Mater toured UK, Europe and USA for six years. At Alma Mater Arif honed his art of acting, began directing and importantly wrote dozens of plays for production. He based the theatre at Tufnell Park Tavern in Crouch End with Judi Dench and Derek Jacobi as two of the high-profile patrons.

Arif was passionate about writing and moved from stage plays to film scripts. In 2001-02 he was invited to study for Masters in screenwriting by the Northern Film School with a bursary from Film4.

In the same year he set up Kaos Films, a film production company based at Pinewood Studios, named after the initials of his wife, himself and their two children, Kathryn, Arif, Omar and Soraya.

Arif wanted to give new writers a chance and created the British Short Screenplay Competition (BSSC) in 2001, described as “the best and the most prestigious screenplay competition in the world” by Sir Kenneth Branagh. The British Short Screenplay Competition received submissions from around the world and finalists were judged by Award winning producers - Kenneth Branagh, Nik Powell, Leslee Udwin, Stephen Woolley, and actor Charles Dance. The BSSC was the only screenplay competition that undertook to make the winning screenplay into a 35mm short film, and several of the short films Arif produced have won at International Film Festivals, including:

During 2008 – 2011 Arif was a visiting screenwriting lecturer at Middlesex University, University of Bedfordshire, and guest speaker The Comedy Writers Society, London College of Communication and Screenwriter’s Festival, Cheltenham.

Arif wrote several feature length screenplays which are in various stages of development. He was particularly affected by news stories about refugees, especially those drowned at sea. He wanted to do something to help and turned to researching and writing about families who suffered a terrible fate in the Mediterranean where out of 500 refugees on a boat that set sail from Egypt on a rusty trawler, all but 10 drowned. Arif searched hard and tracked down the 10 survivors now scattered across the world, met with them, heard their stories and contacted Hollywood producers. He wanted to give the survivors a voice. It resulted in Arif being signed up as Executive Producer with Steven Spielberg and JJ Abrams on a joint feature film project to be produced by Paramount. We hope this film will be his legacy.

In October 1998 we moved to Hampstead Garden Suburb, rented 34 Erskine Hill, then bought 51 Erskine Hill, naming it Apple Tree Cottage and spent 23 happy years there bringing up Omar and Soraya.

Arif quickly established himself as the hospitable and helpful neighbour, the one to go to if you needed anything doing. When our next door neighbour who suffered from MS fell over in her house and was unable to open the door, Arif thought nothing of climbing in through a small window, whilst being bitten by her two dachshunds, and then carrying the neighbour safely to her chair. He rescued a stranded child stuck in a tree, and more recently accepted requests from neighbours to take their children for rides in our Tesla.

An excellent cook and host, Arif was in his element when entertaining and feeding others. I didn’t cook, Arif was in charge. Year round our house was open for anyone who was hungry and even if you popped over for a pint of milk you were not allowed to leave until you had eaten something. Sometimes Arif turned up unannounced at neighbours’ homes with a plate of food, saying ‘try this’.

When our cottage was full of Polish builders doing our loft conversion, Arif noticed that they didn’t take a lunch break, or if they did it was a quick sandwich on the front and back doorstep. He changed that, for weeks they were all instructed to down tools and sit together with us at the dining table for a hot lunch. The said they’d never experienced that kindness before and we bonded with them thanks to Arif’s generosity and big heart.

Every birthday, anniversary, Valentine’s Day, was an extra special culinary opportunity for Arif, with Christmas being the highlight of the year. But Arif didn’t just think about his own family meals. Every Christmas for years he delivered a full Christmas dinner including goose and lamb, to a close friend’s daughter whose parents were vegetarians, so she could have her meat dishes. He wouldn’t sit down to eat with us until he had delivered it to her.

Arif’s BBQ’s were legendary, cooked over an amazing slate BBQ that he built in the garden. From April to October it was non-stop garden entertaining for dozens of friends and neighbours. When he cooked, Arif would offer a full plate of food to delighted neighbours over the hedge during lockdown.

In March 2020 when the first lockdown was announced Arif felt he wanted to do something to help. He placed an announcement on the HGS list to ask if anyone isolating would like some pakoras (Indian savoury snacks) and received about 25 orders. After spending the day shopping and cooking Arif delivered them all individually. He did it again in April, and again in May, each time the list grew bigger and bigger. Not only that, the May delivery coincided with Ramadan, which meant Arif himself was fasting during long daylight hours for a month, yet he still spent the day cooking and distributing food to others.

In October 2020 Arif and I sold our beloved Apple Tree Cottage as we wanted a bigger home, to fill with family and friends, to entertain with more space. We rented in Edmunds Walk N2 and within days Arif had made firm friends with our new neighbours, cooking pakoras for them. Tragically, Arif passed away from Covid-19 before we could choose our new home together.

The family have set up a fundraising site in Arif's name supporting the construction of a series of water wells in countries where they are desperately needed, something which was close to Arif's heart.
https://www.gofundme.com/f/the-arif-hussein-project