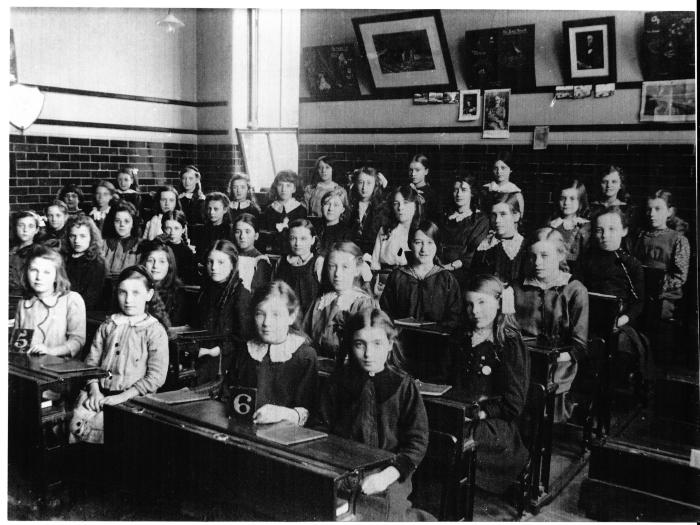 The original proposal for the provision of a school was made by the Hampstead Garden Suburb Trust in a letter discussed by the Hendon Urban District Council Education Committee on 28 May 1907 (most of the Suburb was in Hendon until the creation of the larger borough of Barnet decades later). Sites were offered by the Trust and declined. In May 1909 a temporary school was opened at the Institute on Central Square, and remained there for the next four years. Once a permanent site was agreed, 6 architects were asked to submit plans. In April 1911 plans were finally accepted. 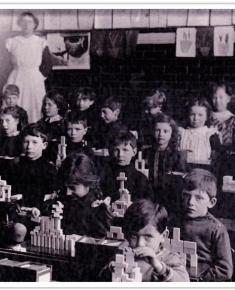 At last on February 3 1913 the new school building was opened with much acclaim. There were two main blocks, one for the Infants and one for the Senior Departments. In each there were six classrooms, five for 50 children in each and one for 60 children - 620 children in the entire school. There were three head teachers, Mr. Kanester for the boys, Miss Line for the girls and shortly afterwards Miss Chilton for the Infants. It was the first school in Hendon to have electric light, and it was equipped with a Cookery and Laundry Centre, and a Manual Training Centre for the boys. 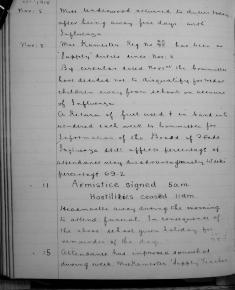 The log books show how the school operated during the First World War including the coming of the Belgian refugee children, and a potato-growing campaign by the boys both inside and outside the school grounds, culminating in the Armistice. Pupils up to age 14 (until 1947)

Between 1918 and 1928 many new activities were introduced. On December 1st 1922 a crystal wireless was set up and in 1924 two classes listened to the first important experiment in broadcasting for educational work in schools. By 1928 the school had become co-educational, and consisted of two departments Junior Mixed/Infants (to 8 years) and Senior Mixed (8-14 years). Mr. Kanester now became head of the Senior School, with Miss Line as headmistress of the Junior Mixed School.

At the outbreak of the Second World War a system of home-tuition came into existence, but as soon as trenches were constructed in the grounds the school opened again and operated throughout the war in spite of difficulties due to enemy action. On September 26th 1940 a land-mine was dropped, landing on Willifield Green, and the Infant School, which at that time was nearest the Green, was severely damaged.

When the school re-opened there were difficulties with over-crowding, despite many children having been evacuated from London by their parents, as evidenced by their letters home on display in the current Junior school entrance. With part of the buildings unusable, some Junior and Senior classes were held in the Staff Room and in the Hall. The beginning of school dinners dates from the Second World War.

The change to a primary school (up to age 11) 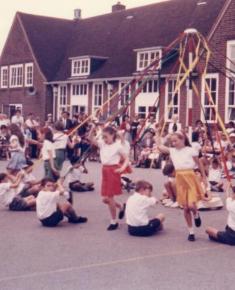 From 1947 the Senior children (over eleven years) were transferred, together with three teachers, to Goldbeaters Secondary Modern School. From September 1950 the school was divided into Infants and Juniors. During the next few years gradual improvements were made to the old school building, and plans for the new building were materialising. In June 1950 the new school Kitchen and Dining Hall were opened (in use until the current new building was opened in 2014), and in 1953 a hot water system was installed in the cloakrooms.

Between the first major re-organisation in 1928 and the late 1980s**, the Junior School had five headmasters:- Mr. Kanester, Mr. Price, Mr. Alben, Mr. Keefe and Mr. Goodliff. The Infant School was taken over from Miss Chilton by Miss Line, who was followed by Miss Hornsby, Miss Pearson, Miss Burley and Miss Galloway. The school keepers in this period were Mr. Turvey, Mr. Lewis and Mr. Collis.

The 2019 Garden Suburb Schools have their own website www.gardensuburbjunior.co.uk which details current events.

This is a digest of two very helpful histories (see GSS Foundation and GSS Brief History), one by Joanna Corden (see GSS Archivist letter) and the other by an unknown author, seemingly of the late 1980s, whose text was found in the school archive. Also see the timeline by writer and broadcaster Alan Dein (whose children are former pupils of the school, as was his late father). 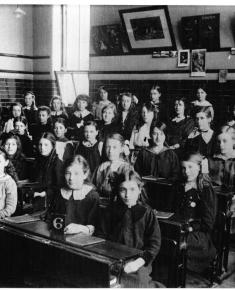 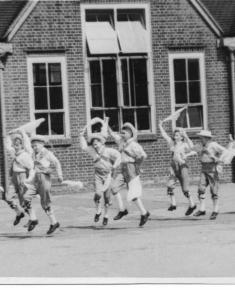 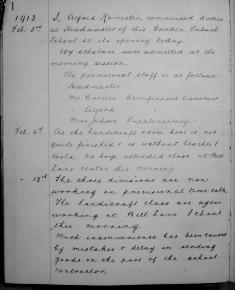