History of the Horticultural Society 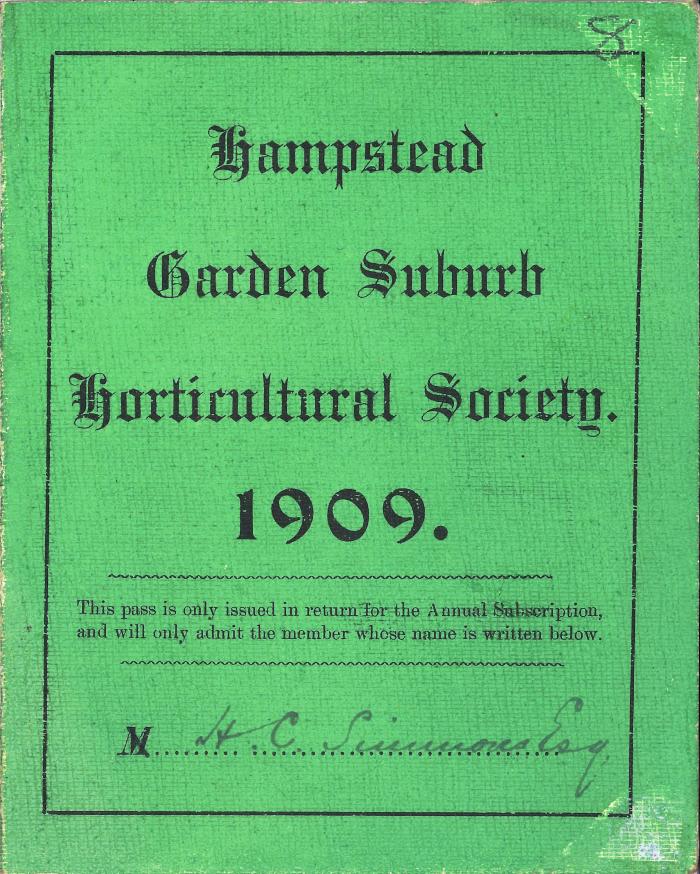 In 1907 Henrietta Barnett's plans for the Hampstead Garden Suburb in NW London came to fruition - "that most nearly perfect example of the unique English invention and speciality, the garden suburb”, according to Nikolaus Pevsner. Mrs Barnett and her gardeners presented new householders with fruit trees for their gardens, many of which still exist.

Two years later, just before 20 May 1909, Mrs Barnett (later Dame Henrietta) put up posters round the fledgling Hampstead Garden Suburb, inviting residents to a meeting '...when the Objects and Rules of the Horticultural Society will be discussed.' It must have been successful, because a few weeks later Hampstead Garden Suburb Horticultural Society held its very first Flower Show in a marquee in Central Square on August Bank Holiday 1909. Annual membership cost one shilling, visiting the show cost 3d for non-members and there were eight classes for members to enter.

During that first season, several gardens were open to the public – quite surprising for an area which had been mostly farmland up to two years before.  Mrs Barnett presented a copper pot to be awarded to Suburb 'best garden' winners, which is still in the Society's possession, though no longer awarded. A second show was held in September. From 1910 onwards, there were three shows a year, sometimes even four when a Spring Show was added for a short time. Nowadays shows are held in June and September.

In 1917 The Suburb Allotments Association was formed, survived for one year on its own, then amalgamated with the Horticultural Society.  It is now once again a separate entity.

As the Suburb itself grew, the Society went from strength to strength as more and more residents of all classes migrated there and men returned to tend gardens and allotments following the First World War.  Between the wars it became one of the largest horticultural societies in the UK, and shows have been held without a break except for the years 1940-45.  Membership began to decline from its high point of well over 1,000 after the Second World War, but the Society's programme al ways formed an important focus of residents' activities, as it still does.

BBC Gardeners' Question Time has visited the Society twice, first in 1958 and again in 1989. As Patron of the London Gardens Society, HM The Queen Mother visited members' gardens in 1979, as did her grandson Prince Edward in 2013. Lord Mayors of London and Mayors of Hendon and Barnet have opened shows on many occasions, as have famous residents of Hampstead Garden Suburb such as Gerard Hoffnung on the society's 50th anniversary in 1959.

In 1989, on the 80th anniversary of its foundation, a Great Apple Hunt was held at the Autumn Show to try and establish just how many of Dame Henrietta Barnett's donated apple trees had survived in local gardens. Experts identified at least 40 different species, many of them probably originals, and the following year the Society was invited by the Common Ground organisation to re-create its apple hunt at the very first Apple Day held at Covent Garden in 1990. In the Society's centenary year (2009) a second Great Apple Hunt was held.

After tough times in the 1990s, the Society re-launched itself in 2000. An enhanced programme of plant sales, newsletters, lectures with personalities such as Bob Flowerdew and Jekka McVicar, and more outings to well-known gardens, as well as innovations at the shows, began to draw in more  members. An invitation to local residents Jonathan Ross and Jane Goldman to become Hon Presidents of the society was accepted, much to the committee's surprise and pleasure. Their regular visits to open the shows, judge scarecrow competitions and eat copious amounts of home-made cake always draw the crowds, the press and, of course, more members. In 2007, in honour of Hampstead Garden Suburb's centenary, the Society was awarded a lottery grant and  as a birthday present to the Suburb, built a raised commemorative flowerbed on local Willifield Green (designed by Stephen Crisp) with the help of members and children from the nearby Garden Suburb School. The Society also helped the Residents Association to launch a new Harkness 'Henrietta Barnett' rose at Chelsea Flower Show the same year. By the end of 2008, membership had grown to 420.

So to 2009 and the celebration of HGS Horticultural Society's own centenary. In addition to all the usual, but enhanced, staples of the annual programme, the Mayor of Barnet, Councillor John Marshall (also a Vice-President of the Society), cut a large birthday cake at a special Centenary Spring Show and Exhibition in March. In July there was a Centenary Festival of Roses and Fergus Garrett gave a talk about working with Christopher Lloyd at Great Dixter. As a gift to the local community, the Society took over the tired old flowerbed outside Fellowship House in Willifield Way from the borough of Barnet, and Stephen Crisp once again created a stunning design for this new Centenary flowerbed, incorporating contemporary shrub and perennial planting and a new tree to replace one that was lost many years ago. A Centenary Garden Buddy Scheme bringing together experienced gardeners and members wanting advice or just a chat about problems or changes to their gardens, also began in centenary year.

With open gardens for people to visit, a brass band playing regularly at the September shows,opportunities to meet over home-made teas, outings for members and non-members alike and, above all, the regular Flower Shows, in the years since the Horticultural Society's Centenary the Society has continued to consolidate its lifelong links with the Suburb itself, ensuring that it remains at the heart of the community it belongs to.  Full details of all the Society's activities can be found at www.hortsoc.co.uk.