The changed Situation after 1918 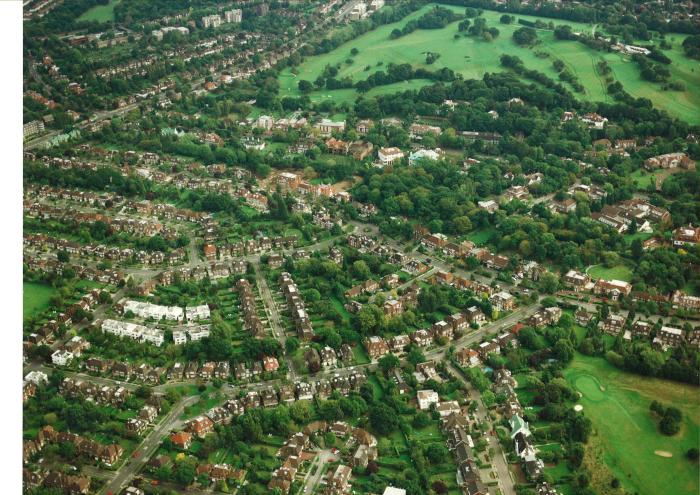 There is a fundamental difference, both in architecture and in landscaping between the earlier part of the Garden Suburb and the later part which was laid out after 1918 under the direction of J C S Soutar. This is only partly due to the superiority of Unwin's ability over Soutar's. It is due far more to the decision by the Old Hampstead Garden Suburb Trust and the co-partnership companies to relinquish the most important social and physical ideals which had guided the Garden Suburb's planners before the First World  War, largely as a result of the inflation of building costs in 1919-20.

Apart from the completion of areas laid out earlier, the development of the Garden Suburb after 1918 consisted almost entirely of conventional houses for sale. There was no attempt to create a socially balanced community, even though that had been achieved to a remarkable extent in the earlier part. This renunciation of social idealism was paralleled by a surrender of the architectural and landscaping values.

The Old Trust took additional land at Turner's Wood and Winnington Road on lease from the Church Commissioners in 1930. Co-partnership Tenants absorbed Hampstead Heath Extension Tenants and Oakwood Tenants in 1930, and five years later in 1935  Hampstead Tenants and Second Hampstead Tenants. With both these amalgamations dividends on rents disappeared. The houses were being built for sale and not for letting. In 1939 Co-partnership Tenants was converted into a company under the Companies Act, and in 1954 it failed in a bid to acquire a majority holding in the Old Trust. The bid was made since the leases held from the Trust were perpetually renewable with rent revisions every 99 years and it was thought  likely that in 2006 they would have to face a change from the old subsidised ground rents to economic ground rents.

In October 1969 the whole of the interest of Suburb Leaseholds Limited was sold to Ashdale Land and Property Company Limited and the covenants entered into by Suburb Leaseholds Limited on acquisition of their lease have been passed on to Ashdale. There are general absolute covenants that the lessee should use its best endeavours to "preserve the present character and amenities" and qualified covenants that the lessee would not, without the consent of the lessor -

History of the Suburb