Despite the onset of the Second World War the previous Autumn, the early part of 1940 saw the community growing in strength. The Annual Report of the year is most illuminating. Partly due to the setting up of a ‘Contacting Committee’ and to energetic visitation work, the membership roll rose to over 300.' The Sabbath services were being attended by close on 100 men.

'There was considerable cultural activity with many lectures and a regular study circle conducted by the Minister. A group also met at private houses every Friday night during the winter to listen to talks of Jewish interest and occasionally the attendance topped the 50 mark.'Throughout the period the ladies of the (Synagogue) Womens Volutary Service were meeting with clockwork regularity every weekday morning and afternoon, with some 100 ladies on the roll.' A very promising Junior Social Section was successful in raising funds from concerts and dances.

A concert, based on Mozart's The Magic Flute, was held in February 1940 and Board Minutes record ' ... that this had proved a success socially,culturally and financially. Over 250 had attended, the music had been of a very high standard, and a profit of £28 had been made, £21 of which had gone to the education classes and £7 to the W.V.S .... this was thus an auspicious beginning for the use of the Communal Hall.' 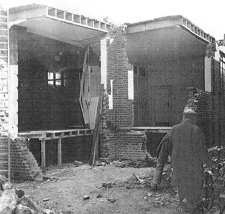 Then the Blitz hit London having the immediate effect of stemming progress in all directions. On 22nd September 1940 the Synagogue buildings sustained a direct hit from a high explosive bomb which severely damaged the old building (then the Hall and Classrooms. It affected the Synagogue itself only mildly but dislodged numerous tiles from the roof. This resulted in serious leakage from the roof on 1st day Rosh Hashana  (The New Year). The religious services came near to being abandoned due to flooding. The Annual Report states that 'all circumstances considered the attendance at the High Festivals was very satisfactory, over 300 worshippers being present. No’ lulavim’ were available for Succot (Tabernacles Festival) but the Succah was duly prepared and decorated, albeit on a modest scale.' 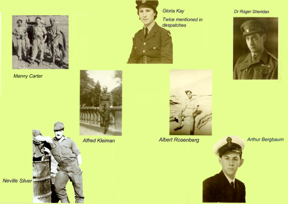 The same Report relates that the membership was falling. People being  evacuated, others were serving with H.M. Forces or otherwise involved in the country's service. 'The W.V.S. never ceased working for even a day, and though its roll of workers fell to 40. by the Spring of 1941 it had produced no fewer than 3,800 articles of the most needed nature for members of .HM. Forces, the Central Hospital Supply Services and for bombed and evacuated children.'The children’s religion classes continued to function throughout but the roll fell steeply from about 60 to 18.

Another body which has continued to function is the Care Committee for Refugee Children.  42 Children being fully maintained by the Committee out of a total of 180 rescued from Germany through its agency.'
.
The Annual Report states 'a new temporary cantor has been appointed.Rev Wilkomirski, whose services in leading the congregation is deeply felt and .beautfully rendered prayer highly prized'.

There were some interesting discussions at HGS Board Meetings durmg 1941. On the 24th August the Board decided that Sabbath services should start at 9.15 with the Reading of the Law at 10.00. 'The Reader  to. be informed that the Services should in any case terminate by 12 midday order that an adequate lesson might be given to the children afterwards

.At thie time  Reverend Isaac Levy, our initial Mininster, was already Senior Jewish Chaplain to  the Forces  The photograph shows Rev Levy addressing a parade in Jerusalem  1942 . It was towards the end of 1941 that Rev. Bornstein became a Chaplain with H.M. Forces and  worked closely under  Reverend Levy in the Miiddle East  .The Synagogue  Board, with the encouragement of Rev. Bornstein appointed Rabbi Dr. Weinstock as Temporary Minister for the period that Rev. Bornstein would be away. Rabbi Weinstock was a brilliant man who had come to this country from Vienna in 1938. Having received nine Sernichas (rabbinical qualifications) before the age of 19 in Poland he had then obtained a Doctorate in Oriental Languages and Philosophy at the University in Vienna and subsequently taught until 1938 at the Principal Jewish High School of Vienna. Since 1938 he had been living in the Suburb.

As Temporary Minister, Rabbi Weinstock was clearly more at home with the rabbinical and educational rather than the pastoral and secretarial side of the Ministry. The Rabbi strove with great zeal (perhaps too much zeal for some members) to encourage a greater religious observance in the community. He worked equally hard at reorganising and revitalising the Hebrew Classes. Although weekday morning services had always been arranged on an ad hoc basis, usually by mourners or those with Yahrtzeit, it was Rabbi Weinstock, during the dark days of the war in 1942, who instituted morning services on a permanent regular basis. In this he was assisted by regular morning worshippers,

Rev. Wilkomirski continued to officiate until 1944 when his engage- ment terminated. In August 1944 Rev. Shlomo Shine, who before had been a Chazan in Manchester, was appointed Temporary Reader, initially for three months. He in fact held this post until the beginning of 1948.

In 1943 the congregation was shocked and saddened by news that Rev.Bomstein, who was only 35, had died abroad whilst serving as a Chaplain to the Forces. The HGS Board were obviously very sympathetic to the young widow with two very young children. They had no objection to her remaining on in the house in Brim Hill provided for the Minister  by the Synagogue, at least until it was required for the next permanent Minister and until another suitable house could be found for her. The United Synagogue,in whose name the house was legally vested, considered that after a reasonable time Mrs Bornstein should vacate the house, in keeping with the strictly enforced rule that when a Minister ceases, for any reason, to hold office, he and his family must vacate the house - the obvious reason being that it would in the normal course of events be required for the next incumbent.

The underlying problem was basically one of providing Mrs Bornstein with suitable alternative accommodation.and its funding. A house in Hammersmith ,suggested by the U.S., was not considered suitable and it appears that no great efforts were made by either the United Synagogue. or the local Board to find a house in or around the Suburb This issue led to much acrimony between the Synagogue and its Head Office.  Only to be eventually  resoved iby a compromise  solution in 1947 with the local Community standing firmly behind  Mrs Bornstein.

Meanwhile Rabbi Weinstock had continued to act as Temporary Minister. However, in December 1945 heo gave notice of his wish to be relieved of his post as from the end of January 1946. Rabbi Weinstock went to live in Israel in 1949 where he became the Director of the Education Department of the Keren Kayemet. He died in Jerusalem in 1981.

The first months of 1946 saw the Honorary Officers and Board seeking to appoint a permanent Minister and also a permanent Reader. ist of candidates. In July 1946  Rabbi. Dr Meyer Lew of the  Shacklewell Lane Synagogue, was appointed Minister and the induction took place on 15th September with Dayan Lazarus officiating.

In December Rev. Emanuel Freilich was chosen to be· the new permanent Reader and was inducted into office by Dr. Lew. Born in ugoslavia he had been Chazan at the Heaton Park Synagogue, Manchester and then at the Shepherds Bush Synagogue.. Rev. Shine has remained a member of the Synagogue and has assisted with Services over the years when called upon.

The immediate post war years saw the arrival in the area of a larger number of the more observant element, who emerged as a strong force at Board level. In 1945 there had been a move by some of the members of this. new element to form a separate Synagogue but in the end they decided to stay m the community and to exert their influence from within. A major issue at the time was the question of a ‘Mechitza’(a partition separating, during services, the  women from the men). andt in December 1947 the Board voted unanimously that a 'suitable grille be erected’, it was eventually installed in 1949.