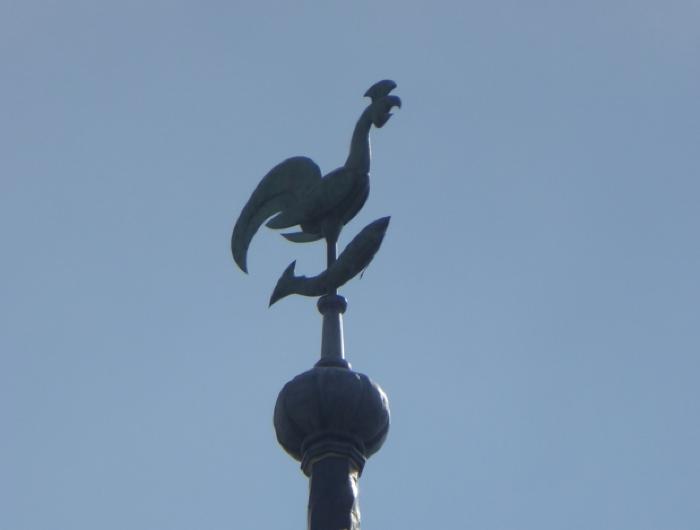 In November 2015 Storm Barney raged over Hampstead Garden Suburb and caused the cock and fish weathervane to come tumbling down onto different parts of St Jude’s roof. The spire and weathervane were a late addition to the church from 1913 paid for by the friends and acquaintances of Henrietta Barnett as her 60th birthday present.  She had recorded this in detail in her own account of the building of Hampstead Garden Suburb which included mention that a time capsule was added to the spire on its dedication.  The resulting work on the spire and tower of St Jude’s led to the discovery within the finial ball of not just the time capsule that Henrietta Barnett referred to containing  a note to the future from her husband, Canon Barnett, but also one that the builders had placed there.  The following collection details the story of the time capsules and their content, the weathervanes and documents on the campaign to raise funds for structural work on the steeple and the skilled work involved by the construction team. A replacement  weathervane and modern time capsules were blessed and reinstated on the spire in July 2021.

“This is the highest place and here we will have the houses for worship and for learning.”

So, it is this central hill that became Central Square and where St Jude’s, The Free Church and the Institute were positioned. St Jude’s Church was officially consecrated 7 May 1911, but it took until 1913 to build the steeple.  This was  funded by Henrietta Barnett’s friends for her 60th Birthday present on 4 May 1911. The weathervane and steeple topped this and remain a landmark that  can be seen from far beyond Hampstead Garden Suburb. 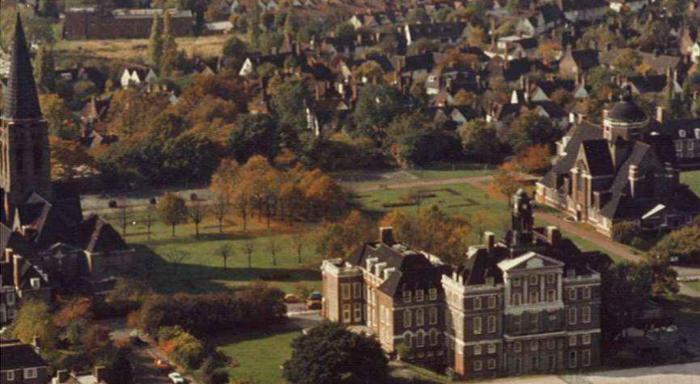 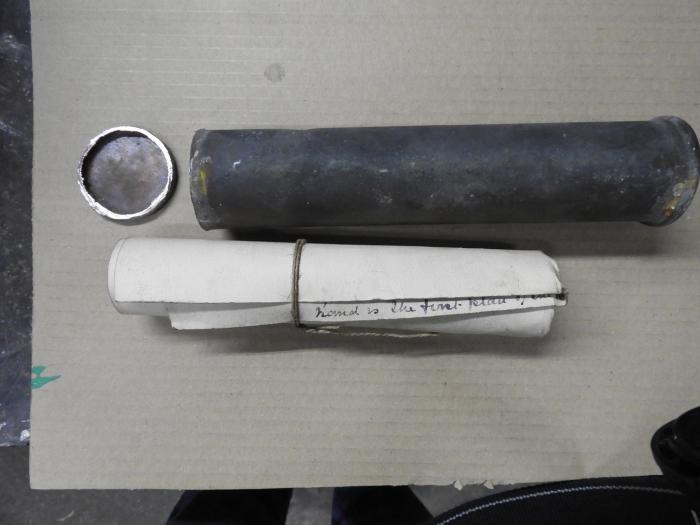 ‘ “I want you both.” Wrote Mr. Lutyens in one of his provocative witty poetic letters which always delighted my husband, “to write something to be placed on the top of the spire of St Jude’s Church.  The Canon is to write ‘A Message to the Future,’ and you are to say, I even I, by my indomitable will have built what you see all around you.’ ”

It is needless to say that I did not obey such an order, but the Canon was induced to write the Message: 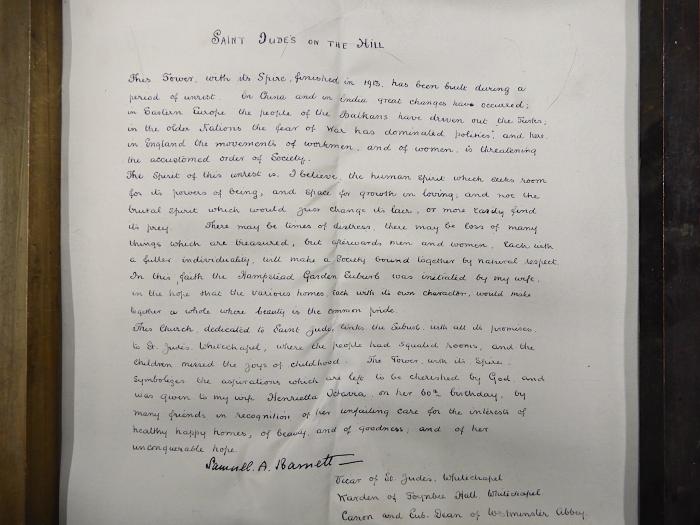 Transcription of Canon Barnett’s letter of 1913 (above)

“This Tower, with its Spire, finished in 1913, has been built during a period of unrest. In China and in India great changes have occurred; in Eastern Europe, the people of the Balkans have driven out the Turks; in the older nations the fear of War has dominated politics; and here, in England the movements of workmen, and of women, is threatening the accustomed order of Society.

The Spirit of this unrest is, I believe, the human spirit which seeks room for its powers of being, and space for growth in loving, and not the brutal spirit which would just change its face, or more easily find its prey. There may be times of distress, there may be loss of many things which are treasured, but afterwards men and women, each with a fuller individuality, will make a Society bound together by natural respect.

In this faith the Hampstead Garden Suburb was initiated by my wife, in the hope that the various homes, each with its own character, would make together a whole where beauty is the common pride.

This Church, dedicated to St Jude, links the Suburb with all its promises to St Jude’s Whitechapel, where the people had squalid rooms, and the children missed the joys of childhood. The Tower, with its Spire, symbolizes the aspirations which are left to be cherished by God and was given to my wife, Henrietta Octavia, on her 60th birthday by many friends in recognition of her unfailing care for the interests of healthy, happy homes, of beauty and of goodness, and of her unconquerable hope.”

Henrietta Barnett recorded in her The Story of the Growth of Hampstead Garden Suburb 1907-1928 this episode and included the text of Canon Barnett’s letter to the Future about the state of the world in 1913. This was  the last thing he wrote before he died.

This letter was written on vellum and encased in a metal tube alongside a ‘photogravure’ of Samuel and Henrietta Barnett of a portrait by Hubert Herkomer (1849 – 1914) from Toynbee Hall. 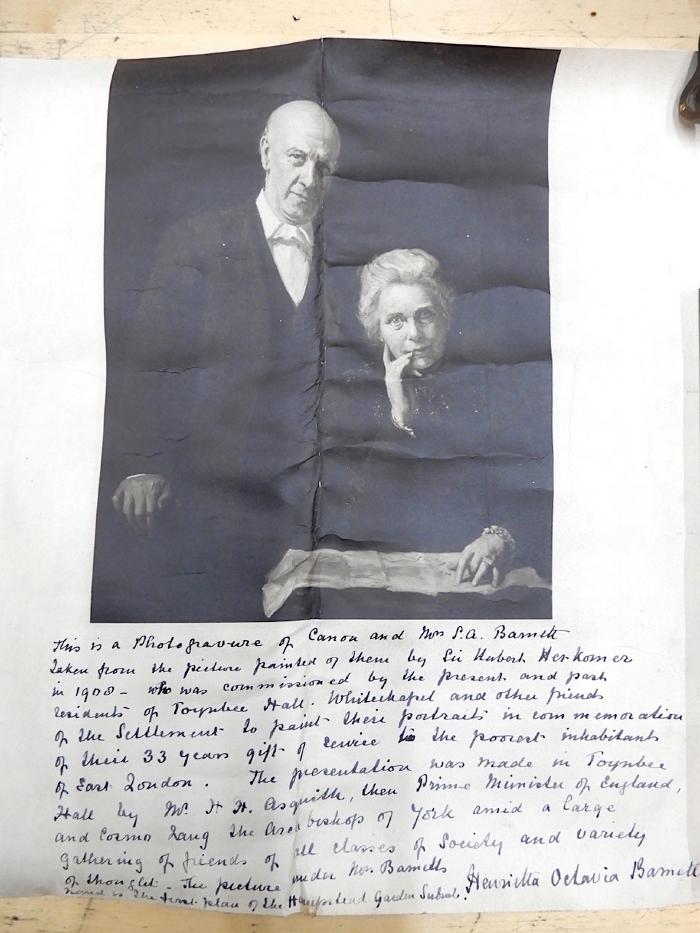 There was no record of Henrietta's accompanying text on the ‘photogravure’ until the discovery of the capsule within the finial ball of the weathervane when undergoing conservation in 2018.

This time capsule was in place by the time the tower and spire were dedicated by Arthur Foley, Lord Bishop of London on  8th May 1913. 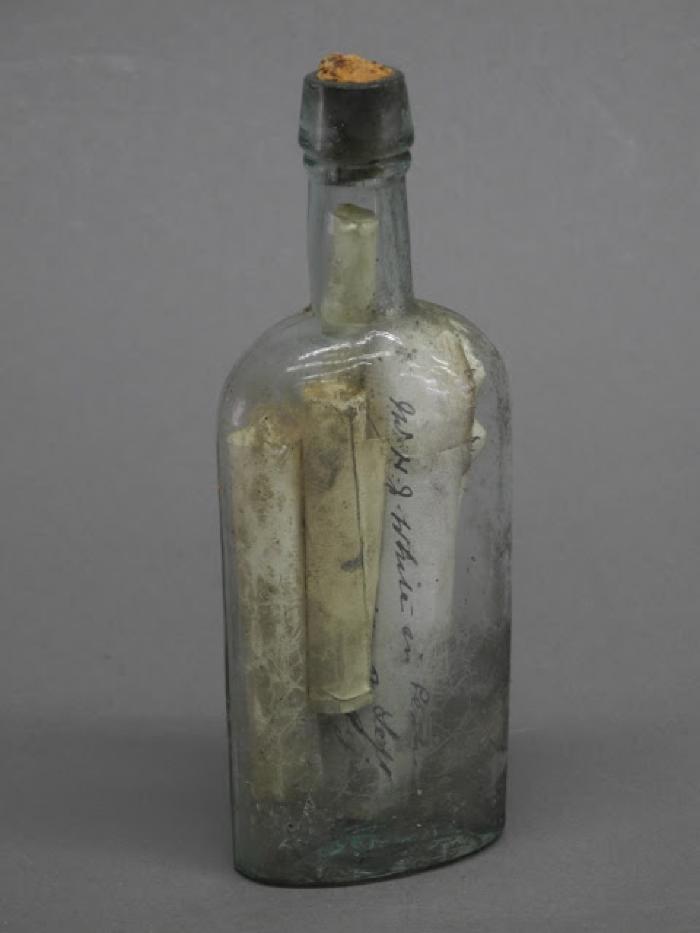 Before the discovery of the original official time capsule, to everyone’s surprise, in 2017 the conservators discovered an unofficial time capsule placed in the  ball of the weathervane in 1913. A ¼ bottle of Ye Olde Bell Pall Mall Whisky full of  notes, cards of architect Edwin Lutyens and his manager Albert Thomas and photos dated 24 April 1913 to mark the completion of the building work, had also been placed here. Henrietta Barnett had not recorded or possibly even known of this time capsule which contains  a fascinating snapshot into building projects of the time. Amongst the items was a photo of the builders standing on top of the roof of the Lady Chapel, a photo of St Jude’s under construction and a signed parish news article about the first vicar of St Jude’s, Reverend Basil Bourchier.

Other items from the original builders time capsule. 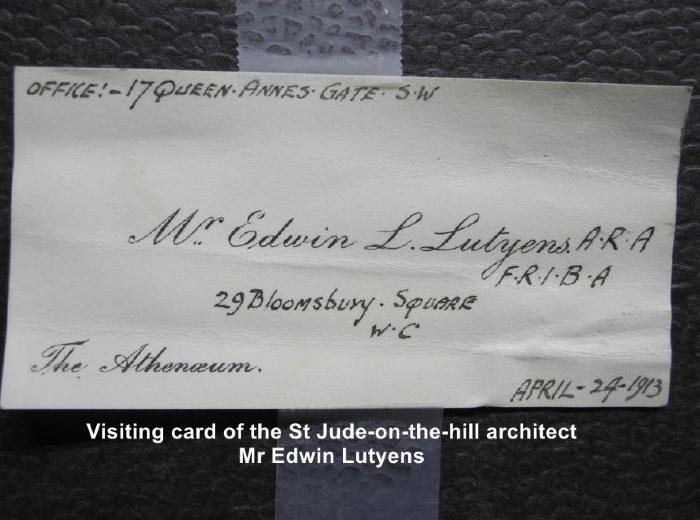 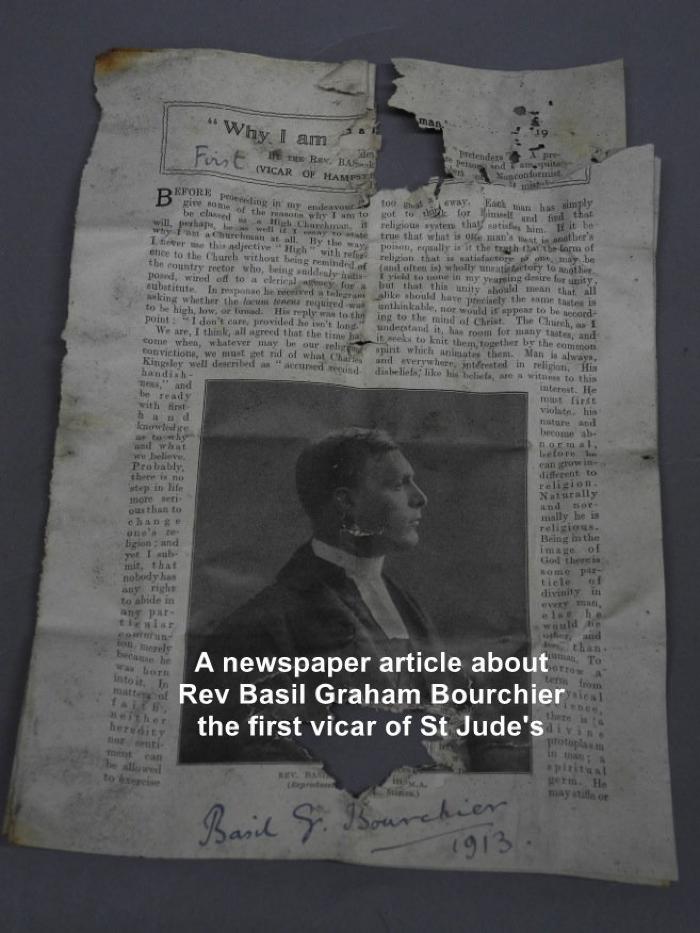 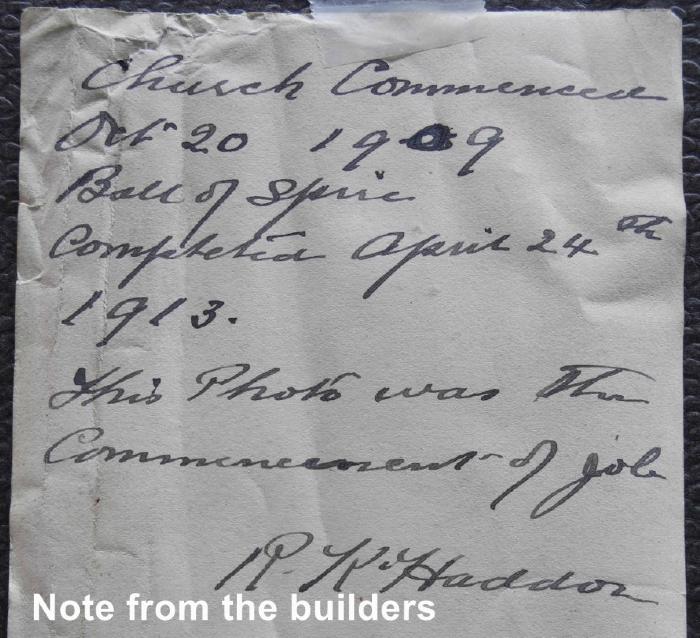 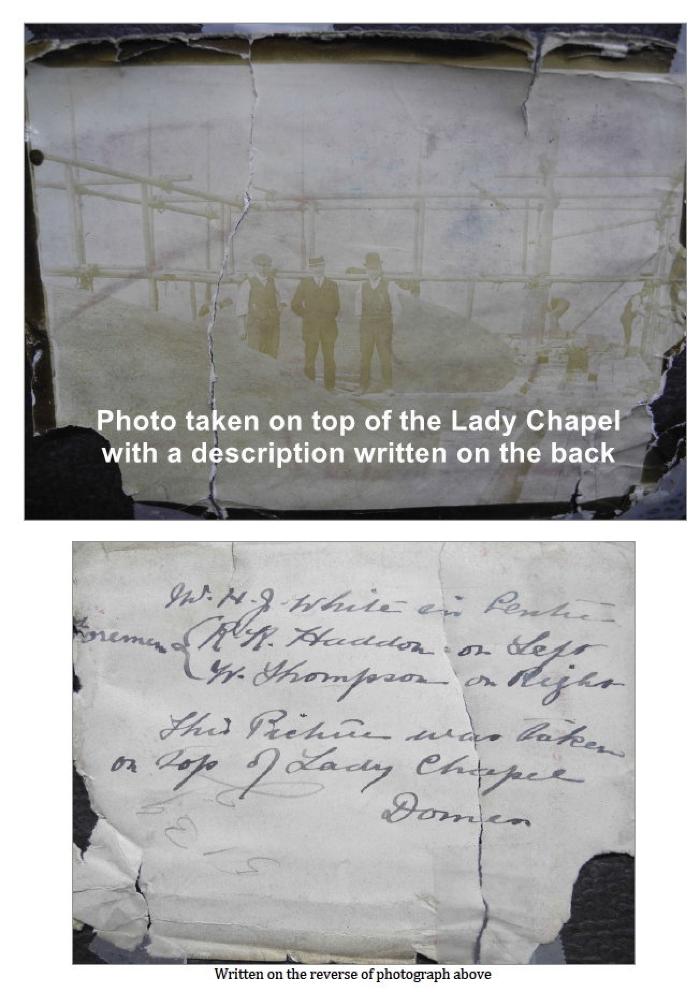 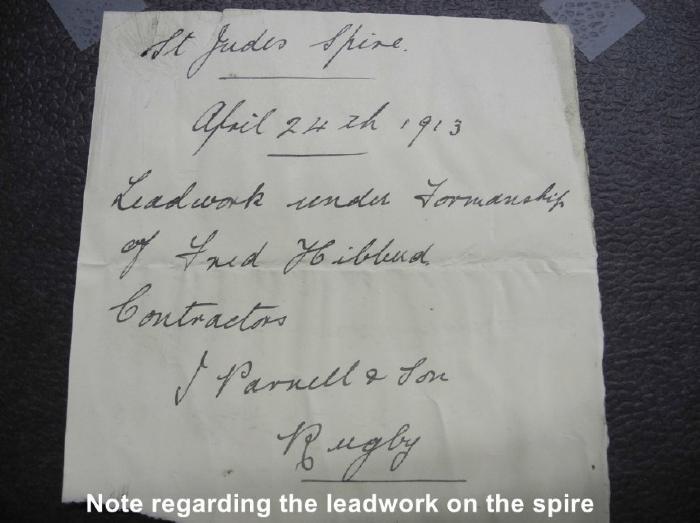 The discovery of the Time Capsules

The reason for conservation work on the finial ball was that on the night of 17/18 November 2015 whilst storm Barney raged, the weathervane took flight off the church steeple.  As David White, Member of the Parish Church Council recorded,

“The 1 ¾ inch diameter wrought iron shaft on which the weathervane sat had been whittled away by the rain over the years to the equivalent of a sharp pencil point. Thus, when the weathervane jammed at some point during the storm, it simply snapped off and blew out of the spire. The shaft, encased in lead, cartwheeled down the spire, tearing the lead cladding, breaking the dressed stone cornice and destroying numerous roofing tiles before it hit the car park and fortunately, nobody was underneath when it fell as it weighed over 50kg. There is still a depression in the car park where it hit the ground.

The Cock landed onto of one of the dormers and the Fish on another from which they were rescued by St Jude’s roofing contractors. Both the Cock and the Fish were badly damaged in the fall.”

The weathervane needed to be replaced which was no easy task as very few people today make three dimensional weathervanes. St Jude’s Inspecting Architect, Margaret Davies RIBA AABC FRSA, was appointed the Conservation Architect and project manager to assume professional responsibility for the essential works to reinstate the weathervane. Work included surveying the weathervane and roof with a drone-mounted camera to record the conditions at the top of the spire and of the roof coverings. The findings were inconclusive which led to the removal of the finial ball so that the scale, nature and condition of the original components could be examined in detail. So, it was only when the finial ball had been removed that the original time capsules from Canon Barnett and the builders were discovered. For further details of the building work refer to David’s article here

The old weathervane was not in good enough condition to be returned to the spire of St Jude’s, and is now displayed inside the church alongside interpretation that was outside the church when the building work was going on. It is not known who made the original weathervane.  An exact replica has now been made by Rupert Harris Conservation and once again proudly tops St Jude’s. The symbolism of the rooster and the cock is traditional Christian iconography.

Reverend Alan Walker writes:
"Weather cocks" have topped church steeples for centuries. The eleventh century Bayeux Tapestry includes a scene of a craftsman attaching one to the spire of Westminster Abbey. The cock is  the ‘proclaimer of the day’, but also a reminder of Jesus' prophecy that the cock would not crow until Peter had denounced Him three times (Luke 22:34). There is an (unsubstantiated) tradition that a ninth century the pope decreed that every church should carry a cock on its steeple.

Until recent times churches were orientated on an east-west axis, so it was always possible to identify which way the wind was blowing.  When that changed the points of the compass, or a separate fixed image were added. Fish play a part in several stories in the gospels and the emblem was an early Christian symbol as the Greek word for fish - ichthus - could be read as an acronym for ‘Jesus Christ Son of God Saviour”

The new weathervane was installed on Thursday 9 July 2021 to a small  crowd of parishioners and passers-by who were gathered in the church car park.  Here, they watched  its blessing before installation. The Ceremony included the Reverend lifting a small child over the weathervane whilst still on the ground – thus symbolically leaping over the highest part of the Church.

The YouTube recording of the ceremony can be watched here

Front and Back page of Issue 147 Suburb News

As well as requiring a new weathervane, the old wooden finial ball also needed  replacing. This was created as a hollow GRP ball treated to look as if it is coated in lead.

Since the contents of the old time capsules will be conserved and exhibited in St Jude’s, it was decided to create new time capsules for the 21st Century. Two new metal tubes were made by Robin Sims, of Sims Marine from MCO Group, to form two new time capsules, sealed against moisture, to be discovered by future generations.

So what were their contents?

The 2021 official capsule contained eight items which included  publicity material produced to fundraise to help pay for the structural work required on the church tower, Ham and High newspaper articles, storyboards, a poster,  and an article by Reverend Alan Walker reflecting on the current state of affairs in 2021 and echoing  Canon Barnett’s  1913 Letter to the Future. The capsule also included a disposable mask and a small hand sanitiser. Each document was laminated before being inserted in the capsule.

To echo the discovery of the original builder’s time capsule of 24 April 1913, a second newly made tube time capsule was created which included three sets of photos of the building firms involved in the construction process to stabilize the church tower and replace the weathervane.  These photos are of MCO the main contractors, CMC Scaffolding,  and Kafften the brickwork specialists.

We obviously don’t know how long these time capsules will remain within the finial ball – hopefully at least another 100 years, but it would certainly be interesting to know what the discoverers of them make of them and what future time capsules might contain.

The new weathervane in position on top of the steeple.
Photo by Marilyn Greene

1. The A4 poster that was put up around the Suburb.
2. The fundraising leaflet that was dropped through every letterbox in the Suburb.
3. Document detailing the contents of the original time capsule inside the finial ball.
4. The front page of the Ham & High 10 June 2021 from when we discovered the structural problem.
5. The article in the Ham & High on 10 June 2021 about the issues.
6. A PDF of the storyboards that were erected on the barriers in the car park and which are now in the church.
7. An article drafted by Alan to reflect the current state of affairs and mirroring Canon Barnett’s 1913 article.