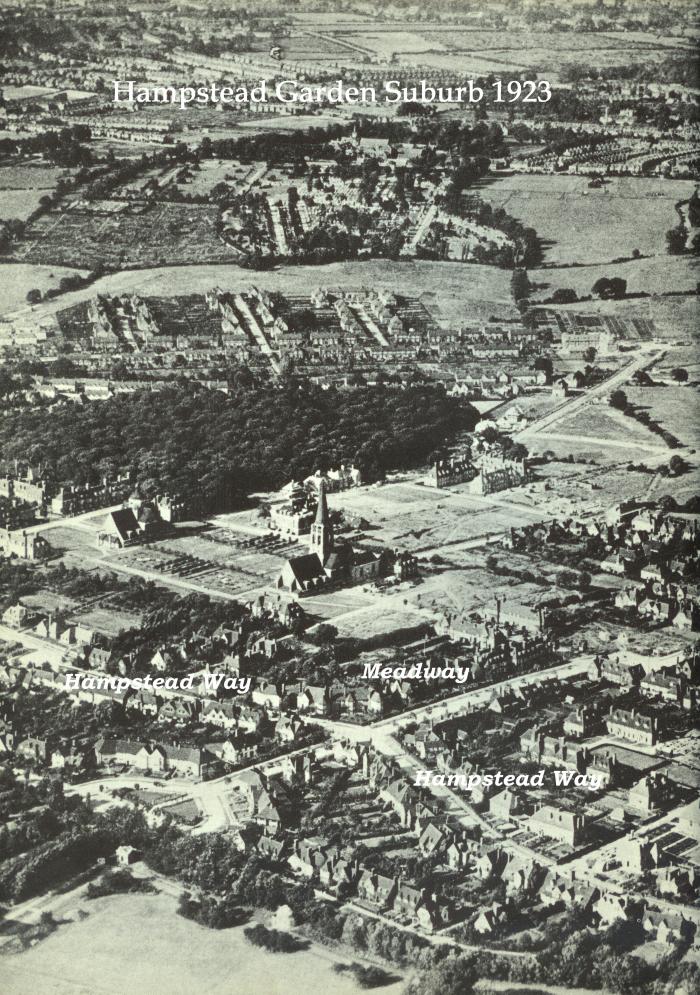 Henrietta Barnett founded the Hampstead Garden Suburb in 1907. She and her husband, Canon Barnett, had been responsible for starting a series of charitable and educational institutions of which the best known are the Whitechapel Art Gallery and Toynbee Hall.

When the project for the building of the Hampstead Tube with a station on the west of Hampstead Heath became known, Henrietta Barnett's first thought was of the threatened "ruin of the sylvan restfulness of that portion of the most beautiful open space near London". Her immediate reaction was the organisation of the Hampstead Heath Extension Council to save 80 acres of land from the "rows of ugly villas such as disfigure Willesden and most of the suburbs of London". The idea of the Garden Suburb grew out of the Heath Extension, for which the money was raised and the land handed over to the London County Council to be dedicated to the public as an open space forever.

The plans were outlined by Henrietta Barnett in an article in the Contemporary Review of 1905. The intention of the company, which she formed in March, 1906 with the help of influential friends, was not to be an ordinary land-owning company but to make a social experiment by providing for people of all classes a beautiful and healthy place to live in.

The broad lines of the scheme were -

Development of the Garden Suburb 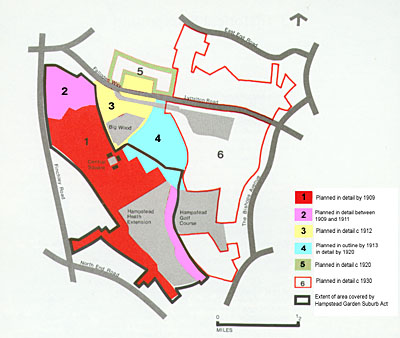 In March 1906 the Hampstead Garden Suburb Trust Limited (the Old Trust) came into being for the purpose of buying 243 acres of land near the Hampstead Heath Extension from the Trustees of Eton College.

In 1909 there were three co-partnership societies in the Suburb. They were formed under the Industrial and Provident Societies Act in order to take leases from the Old Trust for building development. These companies were Co-partnership Tenants Limited, which was founded in 1907 and not confined to Hampstead Garden Suburb alone, and Hampstead Tenants Limited and Second Hampstead Tenants Limited founded in 1909 for the Suburb. Their object was to provide housing and social, recreational and educational institutions. They had close links with the Old Trust.

In 1911 the Old Trust took possession of a further 112 acres which included Big and Little Woods, from the Ecclesiastical Commissioners. Part of this land was developed by the co-partnership societies under strict Trust control and the whole eventually re-leased to them in 1919.

The co-partnership societies took another 300 acres from the Ecclesiastical Commissioners with the consent of the Old Trust, and Oakwood Tenants Limited and Hampstead Heath Extension Tenants Limited were constituted to undertake this development.

The Board of the Trust appointed Raymond Unwin as Architect and Surveyor in 1906. He was responsible with his partner, Barry Parker, for the preparation of the plan of development and for designing a large number of the early houses and supervising the plans and elevations of houses designed by other architects. From the start, Edwin Lutyens was associated with him as Consulting Architect and he designed many of the principal buildings.

One of the early difficulties to be overcome was that the new ideas of development in the minds of Henrietta Barnett and Raymond Unwin ran counter to established practice. The first Town Planning Act (1909) was not yet on the Statute Book and urban development was controlled by local bye-laws and regulations and was rigid rather than creative and flexible. George Cadbury, anxious to put his garden city ideas into practice at Bournville, had already found himself hampered by the bye-laws. At this time enlightened developers could only secure flexibility in rural districts. For this reason Joseph Rowntree was developing New Earswick in a rural district near York, and the First Garden City Company was starting to develop at Letchworth, in a rural part of Hertfordshire. Raymond Unwin was the architect for both.

Examples of roads and drives used at Earswick, Letchworth and Hampstead

"There shall not be built in the Garden Suburb on the average throughout a greater proportion of houses to the acre than eight".
"On every road in the Garden Suburb (whatever the width of the said road) there shall be between any two houses standing on opposite sides of the road a space not less than fifty feet free of any buildings except walls, fences or gates."

"With respect to any gardens, recreation grounds or open spaces provided by the Company for the common use of the inhabitants of any dwellings in the Garden Suburb the Company may make bye-laws for the regulation thereof...." Bye-laws were so made.

Dealt with the laying out and making of roads and suspended the operation of local bye-laws under certain conditions. It recognised the difference between cul-de-sac roads of limited length and other roads:

"Any road not exceeding 500 feet in length constructed primarily for the purpose of giving access to a group of houses in the Garden Suburb and not designed for the purposes of through traffic (known as an accommodation road), may with the consent of the local authority be exempted from any operation of any bye-laws of the local authority relating to the width of new streets and footways."

In addition to allowing Unwin's ideas for the development of the Garden Suburb to go ahead and to act as an example for future residential development, the 1906 Act was the foundation stone upon which the first Town Planning Act was built.

For Henrietta Barnett the model for the Suburb was the country town, but the emphasis was on the country rather than the town. She wanted to show "how thousands of people, of all classes of society, of all sorts of opinions, and all standards of income, can live in helpful neighbourliness", and that this was to be achieved in such a way that "from every part there shall be good views or glimpses of distant country".

In accordance with the general ideas underlying the whole conception of the estate, Unwin's aim was "so to lay out the ground that every tree may be kept, hedgerows duly considered, and the foreground of the distant view preserved, if not as open fields, yet as a gardened district, the buildings kept in harmony with the surroundings". Ideas that originated in the 18th Century landscape garden were applied to the planning of streets and the siting of houses for the accommodation of a working community. This is an outlook which comes back to one of the first aims of the founders "to do something to meet the housing problem by putting within the reach of the working people the opportunity of taking a cottage with a garden within a 2d. fare of Central London".
Loading...
Historical Background
Related Collection

History of the Suburb
Related event