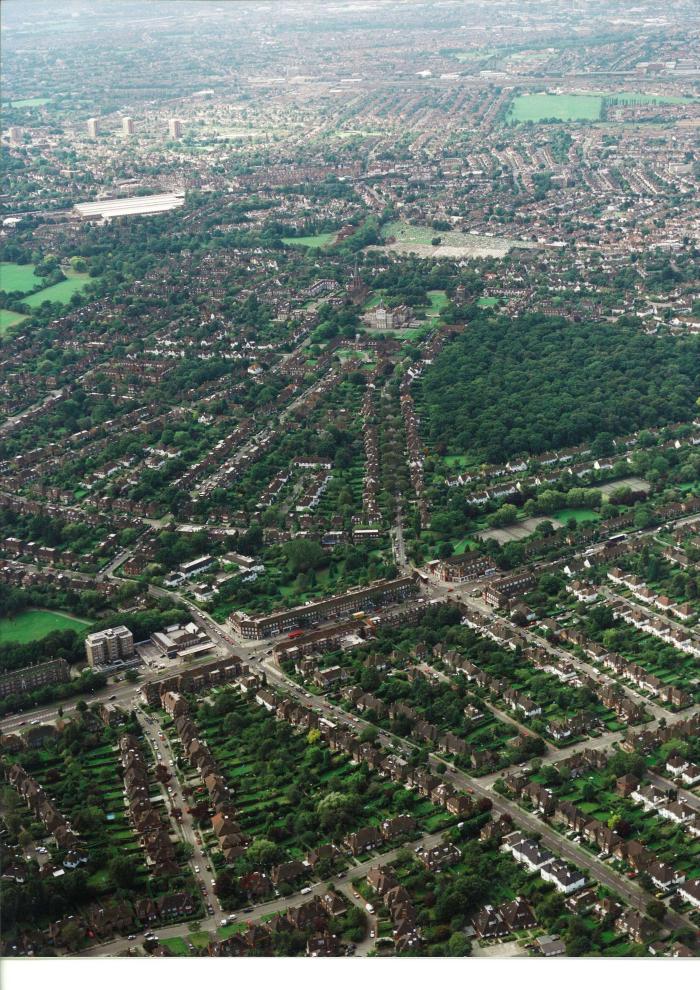 Aerial photograph of Central square and the Holms

Those with some slight knowledge of Suburb history will probably know that the land secured by Henrietta Barnett in 1907 was acquired from Eton College, and may perhaps be vaguely aware of Henrietta's notorious (but as we shall see inaccurate) remark that "...the last time this land changed hands it was under the signature of Henricus Octavus-Henry VIII-a king who parted with the broad acres to enhance his pleasure. The next time it changed hands the deeds were signed by Henrietta Octavia, not a queen, but a woman..."

Few residents will have any idea of how Henry VIII came to mixed up in all this, how Eton got the land in the first place, or what happened before that. This article sheds some light on the Suburb's history from the earliest times, or at least from the depths of the dark ages.

The dark ages are a particularly appropriate starting point, because 1997 marks the l400th. anniversary of the arrival in 597 AD of St Augustine, sent by Pope Gregory the Great on a mission to convert the English. The land on which the Suburb now stands was among the first acquired by the newly established church in London. Historians will probably never be sure of the exact sequence of events, but the two great London churches, St Paul's Cathedral and Westminster Abbey both had holdings of land in this area from a very early date. The boundary between their estates, probably dating from Saxon times, runs through the centre of the Suburb; parts of it are still clearly visible today, notably where it follows the edge of Big Wood and Little Wood. The church's invo1vement as a landowner in this, area (apart from the Parish Church of course) finally ended only in 1958 when the Church Commissioners sold their last remaining freeholds. I shall look mainly at the Abbey's holdings in this article; in the next issue I shall turn to those of St Paul's.

The Anglo-Saxon Chronicle records that in the year 604, Augustine consecrated Mellitus as Bishop of London "to preach to the East Saxons". St Mellitus established a church dedicated to St Paul on a site in the City close to a temple abandoned by the Romans. His position was not secure, and he was forced to retreat to Gaul. A period of instability followed and St Erkenwald, appointed Bishop in 675, is generally credited as the founder of St Pauls. More of that in the next article.

The early history of Westminster Abbey is even more shrouded in legend than that of St Paul's. Anxious that their church should have as venerable antecedents as their neighbours St Paul's, the mediaeval Abbey monks claimed that their foundation also dated from the beginning of the seventh century. But not content with this, it was said that the first church on the site had been miraculously consecrated by St Peter himself, who came by night and was ferried across the Thames by a fisherman. When St Mellitus arrived the next morning to perform the dedication ceremony he found holy oil and lighted tapers and all the signs that consecration had already taken place.

Legend also has it that the Abbey acquired lands in this area at a very early date. It is said that "Bleccenham" which later formed part of the manor of Hendon was given to the Abbey by Offa, King of Essex in the early eighth century, although the writer may have got confused with Offa, King of Mercia (757-796). Disentangling fact from fiction in the Abbey annals is in many cases now impossible, such was their fondness for forged charters. However it is certain that the Abbey was refounded by St Dunstan in the tenth Century and in about 971 King Edgar confirmed a grant of lands in Hendon including Bleccenham. In the Domesday survey (1086) "Handone" is stated as belonging to the Abbey.

Another of the Abbey's possessions in mediaeval times was the Leper Hospital of St James. This hospital for fourteen "leprous damsels, living chastely and honestly in the divine service" is also thought to be of Saxon ongin, although the first mention of it is in a document of around 1100. It was situated where St James's Palace is today. In 1259, Bela, widow of Austin the mercer, gave the Hospital some land in Hendon which she held (presumably as feudal tenant of the Abbey, as the Abbey still held the lordship of the manor of Hendon). In 1273 the Hospital acquired some more land in Hendon from William de Pavely and his wife Millicent. These lands included what later became known as the Wyldes estate.

In addition to the fourteen sisters, the hospital also housed eight brothers. It seems the ways of the hospital became increasingly lax. The reports of the visitations by the Abbot of Westminster in the thirteenth and fourteenth centuries list various steps taken to keep the brothers and sisters out of each others rooms and to prevent drunkenness and "incontinency" among the inmates. In 1320 one of the brothers was said to have frequented taverns and spent the hospitals's funds on his pleasures; another had gone to the sisters' rooms without leave of the master and ate and drank there; the sisters were said to be spreading slanderous reports of the master and the prior and one Margery Flyntard had broken her vow of chastity. The Abbot does not seem to have brought about any improvement with the result that the King instructed him not to interfere in the running of the hospital. A dispute between the Abbot and the King's Treasurer over who was entitled to the supervision of the hospital followed and judgment was eventually given in the King's favour in 1342. The verdict refers to the hospital's estates in Hendon.

The Black Death carried off all but one of the inmates; and in 1384 there were none and the hospital was let to Lady le Despenser. It was back in use again by the beginning of the fifteenth century when a horse-thief is recorded as having taken refuge in the chapel. Eventually in 1449, Henry VI gave perpetual custody of the hospital to Eton College. With the hospital went its lands, and thus Eton became the owner of the Wyldes estate in Hendon (as well as the Chalcotts estate in Hampstead, which they sold only last year).

In 1531 Henry VIII was on the throne, and the hospital, which lay not far from the royal palace of Whitehall, housed only four sisters. As the nineteenth century historian Edward Walford put it "Henry VIII... set his covetous eyes on the place; and seeing that it was fair to view, while the sisters were defenceless, he resolved to possess himself of it much as Ahab resolved to become master of Naboth's vineyard." The Provost and Fellows of the Royal College of Our Blessed Lady of Eton were requested by the King to hand over the hospital. The King was prepared to let Eton keep Wyldes and Chalcotts and as compensation for losing the hospital itself he offered them some land in Suffolk and Kent. Eton had little choice but to comply but regarded this as a pretty raw deal, and well into the twentieth century Eton school-boys were said to chant:

"Henricus Octavus
Took away more than he gave us"

Eton granted various leases of the estate, frequently with rent "in kind". As late as 1845 a tenant delivered 308 gallons of wheat, 648 gallons of malt and 24 sheep to the Great Hall at Eton as part of the half year's rent.
Wyldes farmhouse, known for many years as Collins' Farm, was sub-let in 1823 to the painter John Linnell (commemorated by a blue plaque today) who was visited by amongst others John Constable and William Blake. Later it was let to summer visitors, including Charles Dickens.

Finally, as is well known, having initially refused to obtain an option of all the land she wanted because she was "only a woman", Henrietta Barnett secured from Eton an option on the Wyldes estate, and it was not long before Raymond Unwin, whom she had engaged to plan her new Garden Suburb, was taking up residence in Wyldes farmhouse (also commemorated by a blue plaque). One of the syndicate which Henrietta put together to take the option from Eton her "showman's happy family" as she put it was Dr A F Winnington Ingram, Bishop of London. 1300 years after St Augustine consecrated St Mellitus Bishop of London, Henrietta used the influence of his successor to acquire land originally granted to Westminster Abbey.

Henrietta Barnett may have been lax about historical accuracy, but the truth is no less intriguing than her fiction.

History of the Suburb