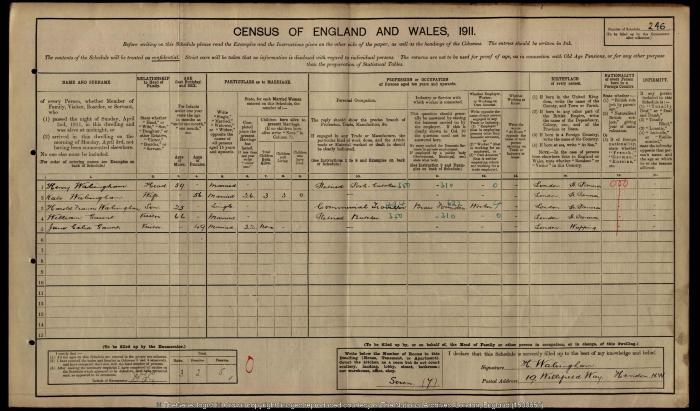 The purpose was to analyse the roads then existing to determine the age, sex and occupations of the early residents and to glimpse an insight into the lives of the first residents. Andrew Glendinning carried out an analysis of Temple Fortune Hill and the results encouraged the Suburb Archives to expand this into a full survey of the Suburb roads existing in 1911.

In June 2016 an initial meeting of the volunteers (Janice Blackstaffe, Judy Dodds, Janet Elliott, Mary Fraser, Andrew Glendinning, Linda Lewis, Kate Webster and Micky Watkins) was held, and each volunteer was given a number of roads to analyse.

The source of the information came from Ancestry.com, starting by using the Census summary sheets which gave details of the occupied houses and the names of the heads of households. This information was then used to access the individual census record for each household which gave details of the names, sexes, ages and occupations of the residents and where they came from. These details were put on a spreadsheet for each road and the summary information transferred to a summary sheet.

By early 2017 some interesting results were being uncovered: 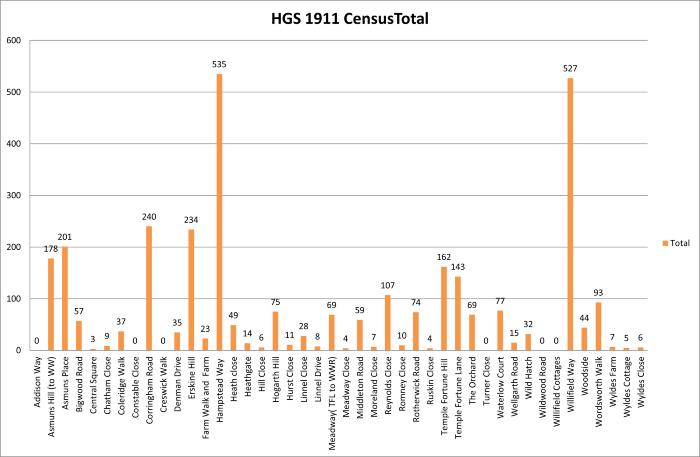 A display of the initial census findings was first shown at the Proms at St Jude's in 2017. Further displays were held with further research and analysis in 2018 and 2019.  The display was then moved to St Jude’s Church (after previously being shown in the Proms marquee). 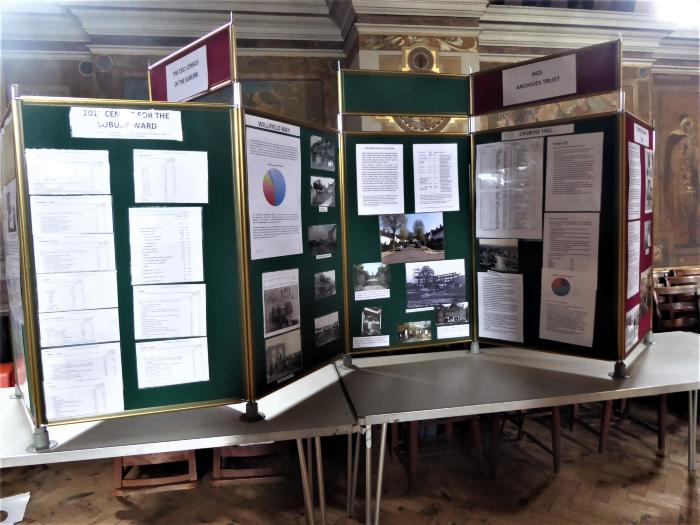 The work on the census has been continued by Kate Webster who created two walking tours for the Proms at St Jude's. She initially led these as walks for the 2019 Proms at St Jude's and converted them into guided audio walks for the 2020 proms. The first details the older Artisans’ quarter along with Central Square and the Orchard and the second continues along Hampstead Way looking at the larger house developments mainly running alongside the Heath Extension but also including Waterlow Court. Some extraordinary people lived in the Suburb at this time not least some significant women involved in the Women’s Suffragette / Suffrage movement whom Kate expands upon in the audios when passing where they lived. 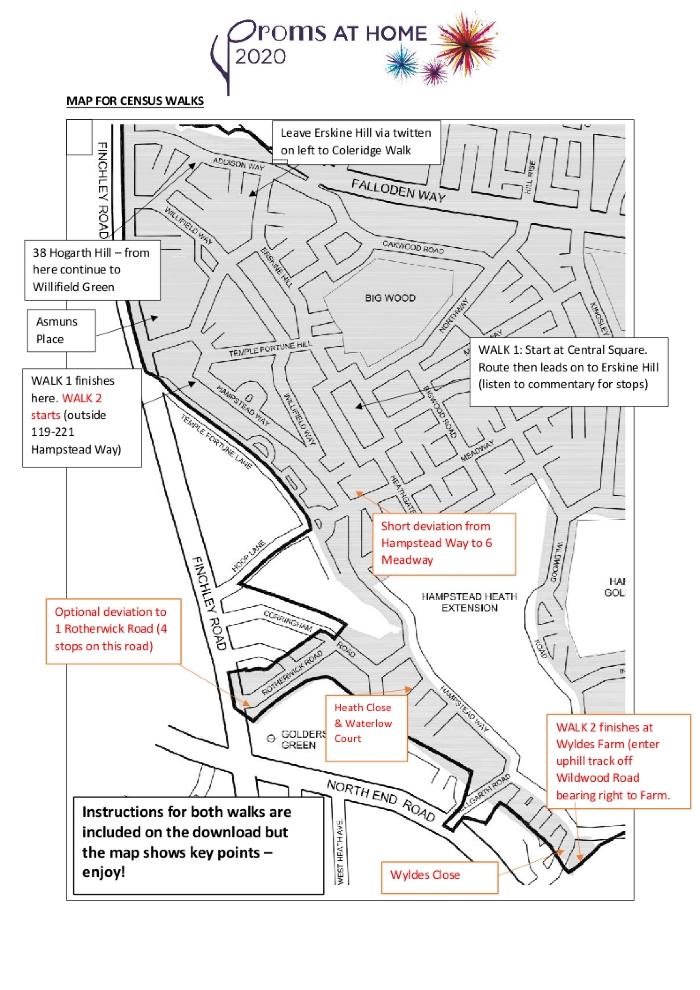 Map for Census Walks 1 and 2

The census asked the name and surname of everyone who spent the night and had been alive at midnight of 2nd April 1911 in the dwelling or anyone who arrived in the morning of the 3rd who had not been elsewhere; the relationship to the head of the family; their age at last birthday and their sex; particulars as to marriage which included length of marriage and children born alive of the marriage and children who were still alive or who have died; personal occupation for those aged over 10 including industry or service with which the occupier is connected (domestic servants in private households were not required to state this); whether employer, worker or working on own account (self-employed), whether working at home; birthplace, nationality options included, British subject, whether naturalised British or foreign nationality.  The final question was on mental or physical infirmity (disability). An example of a form can be seen here.

National Significance of the 1911 Census

The 1911 Census was nationally important – it was the first-time forms were completed by householders themselves in their own handwriting. It collected new data for government planning which allowed inferences to be drawn about subjects such as infant mortality, fertility, crowding.

The Census also coincided with the Women’s suffrage campaign and was boycotted by some suffrage groups as the findings of Hampstead Gardens Suburb Census Project discovered. 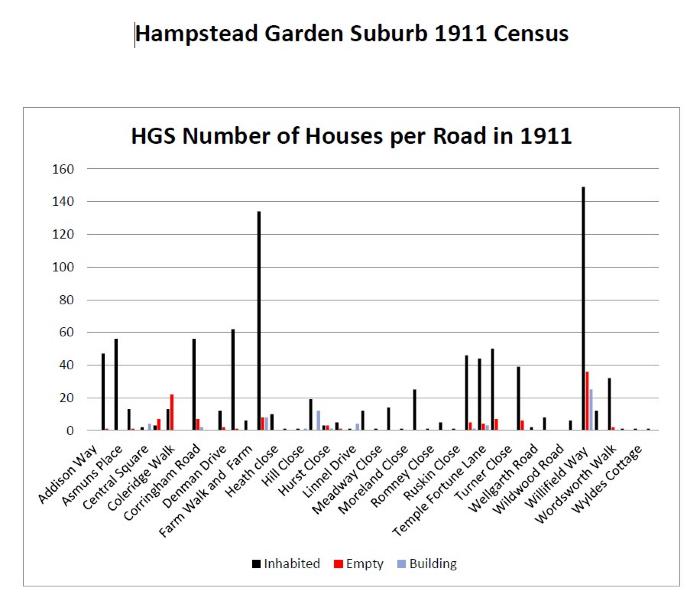 In 1911 the Suburb was only in the early years of construction.  The first land had been purchased from Eton College in 1906, and the Hampstead Garden Suburb Act was passed by parliament the same year. Raymond Unwin’s first plans were drawn up in 1905 though the layout was modified several times in the next few years. Building started in 1907 and good progress was made but many roads were no more than lines on the map or were only partially built by early 1911.  Some roads only had one or two occupants whilst they were in construction whilst others were pretty much fully occupied. The census also showed that cottages in Wild Hatch had predated the construction of the Suburb and had appeared in the censuses of 1901 and 1891 and were occupied by farmers and cowmen. It also showed that in the short period before the First World War, that although rental prices may have been inaccessible to the lowest working classes, there was truly a mix of artisans and working people alongside the wealthier professionals and families who lived in the larger houses around Hampstead Heath Extension. Most of the houses in the artisan quarter would have been leased rather than owned as they are today.  Also, large number of people involved in the construction and running of the Suburb such as builders, architects and members of the Hampstead Garden Suburb Trust lived in the newly built houses. Most of the larger houses had one or more servants.

Where People Came From?

In the Artisans’ quarter more people had moved from other parts of London and many of the children were not born in Hampstead Garden Suburb. As to be expected with the smaller houses, not many of the houses had live-in servants.

A surprising number of people came from beyond London. People moved to London for work. Occupants from some of the more educated and higher status occupations lived in the larger houses and had moved from other parts of the UK and further afield such as Europe, Russia and the USA. Several people were born in Commonwealth countries such as India, Australia and New Zealand. The more middle-class areas of the Suburb were occupied by residents who had been born though-out the British Isles.

Typical of new residential areas which tend to attract a high proportion of new families, the age of the population was younger than the national average with some very young couples in the Artisans’ area.  The exception was The Orchard, which like Waterlow Court reflected Henrietta Barnett’s knowledge of housing needs. Life expectancy was only 54 for women and 50 for men at this time but the census also showed that there were a few instances of individuals in their 80s.  However, the area attracted smaller families than other parts of the UK with less infant mortality deaths. There was a question about this on their census form.  In most houses with children, they were under 16 but there were a few exceptions in the Artisans’ quarter where adult children were living and working with their families. 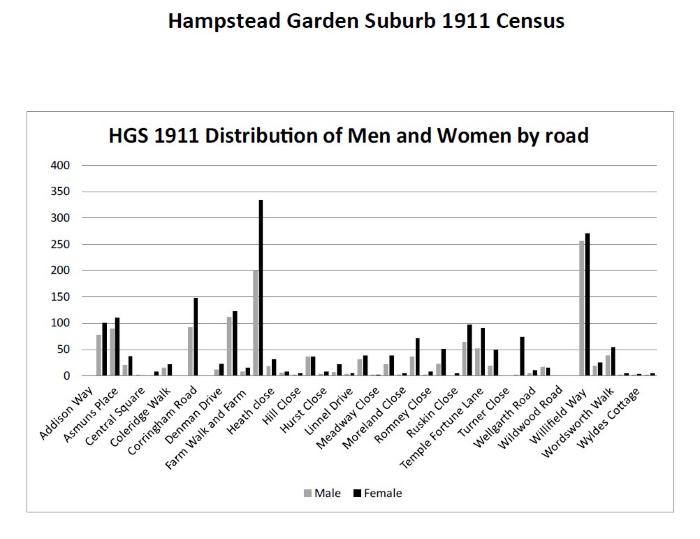 The Census shows more women living in the area than men with most domestic servants being women too. The proportion of women in the population was greater in London than nationally probably because of the concentration of female employment opportunities in London in the emerging fields such as clerical and administrative roles, telephony, typing, and the growth of education, nursing and the civil service.  London also drew women to work in domestic service. In households with married couples, as expected of the times, the majority of wives did not work.

There were a variety of occupations present in the Artisans’ quarter.  Despite being named the Artisans’ Quarter more people held professional jobs than manual ones. There were several builders who were probably involved with building the Suburb and several architects including some now well-known Suburb architects names such as Herbert Welch who lived at 1 Asmuns’ Hill with his wife, one year old daughter born in Hampstead Garden Suburb and a servant.

Occupations amongst others included: clerks and administrators, upholsterers, tailors, designers, people involved in teaching and lecturing, engineering, the printing trade, the post office, hair-dressers and gardeners.

There were several examples of women who refused to fill in the forms, but we know they were professional and were heavily involved in working promoting equal rights for women in the Suffrage movement.  Kate Webster’s first section of her audio walk details some of these personalities.

From its opening in 1909, the Orchard was built to provide housing for older residents.  The census showed that they were older than average, predominantly female, widows and usually retired.

Waterlow Court, being built for women occupants shows a good example of the roles available for women in 1911. Office and administrative work was the most common occupation, accounting for one third of the residents. The next most important area was education, lecturing and other related areas.  A number of tenants were artists, usually painters, but also a sculptor, a writer and a professional violinist.  Most of these were self-employed. A further 10% of employed residents were nurses, whilst the three retired residents had also been in nursing.  These were reasonably well-paid professions and the dearth of women working in lower paid professions such as in retail show that the housing was not affordable for all.

In some areas of the Suburb with larger family homes, there were occupants who tended to have similar occupations.  For example, in Litchfield Square there was a grouping of civil servants and a grouping of people who were either artists or involved in art institutions. For many of the households, the male heads of the family were the only family members working other than the servants. They held professional and managerial roles such as in the medical profession, solicitors, architects and brokers. The ages of these professionals were generally older than in the smaller houses of the Artisans’ Quarter.

Rev Rushbrooke from the Free Church was living in Hampstead Way in 19011 before moving to the Manse. 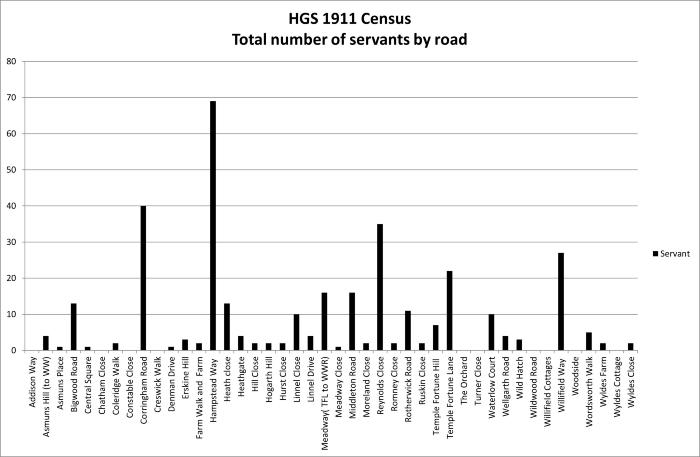 46 Hampstead Way was designed and lived in by the architect Thomas Millwood Wilson. In 1911 He, his wife, three children and a servant were living here.

The census is interesting as it shows that over 14 architects lived in homes both in the Artisans’ Quarter and in the larger houses with some building their own houses. Several of the early Suburb architects such as Raymond Unwin, Michael Bunney, Herbert Arthur Welch, and Charles Paget Wade were amongst them. You can find out more about these in the Hampstead Garden Suburb Trust’s article Architects and the 1911 Census.

Detailed Findings from selected Roads covered in the Census

Some of the roads that have been analysed in detail can be seen via the following links: