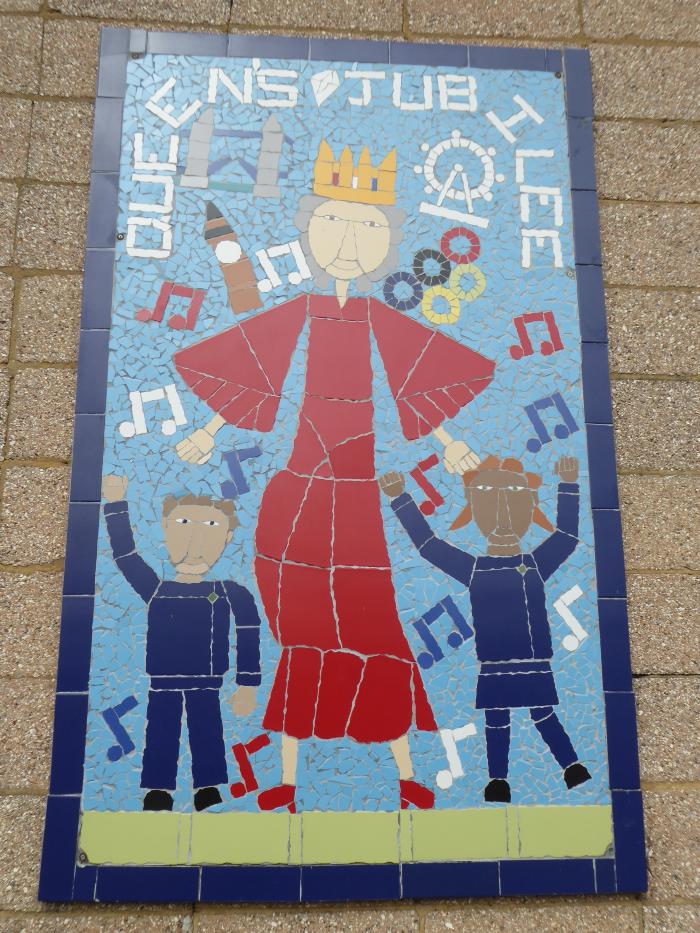 Queen's Golden jubilee mosaic on side of Infant school 2002

The history of the School is set out in more detail here.

Designed and supervised by the Middlesex county architect, Cecil George Stillman FRIBA (1894-1968), Brookland schools were built in a post-war Modernist style with a light steelwork structure, steel thin structural columns, ceilings of concrete mixed with straw, and external walls of facing brick. Each class room was filled with louvered top light, aluminium sliding sash windows, store, sink and French doors to the open air. The schools were and are still connected via the kitchen. There is now also a path connecting the two schools.

Many of the original architectural features and fittings such as coat racks with central heating below and radiators still exist today although some of the louvered top lights have been blocked in and the original metal framed windows replaced.

The infant school still has the original abstract plaque design in relief of children playing ball, on the side of the building, which was joined 50 years later, in 2002, by mosaics designed by the children for the double jubilee of HM The Queen and the Schools .

In 2017 an ‘eco’ nursery school replaced old temporary buildings, and then in 2018 in October 2018 an eco-friendly solar-powered building was opened for years 4 and 5 pupils by the Mayor of Barnet Councillor Reuben Thompstone. They were produced by Nat Zero Buildings who specialise in zero carbon buildings. The Brookland School eco buildings were constructed off site and erected on steel frames. They are powered by solar panels on the roof and insulated throughout. Read the article on page 3 of the Suburb News headed Brookland goes ecological. An eco garden has been created behind the Year 4 and 5 classrooms.

The School has a number of pieces of public art most notably the mosaics and the original relief of children playing a ball game on the side of the Infant school building.

In 1998 when her grandson attended the school, the late Naomi Blake donated a sculpture Mother and Child II which is situated in front of the Infant School.